Men from the Glenfield Memorial 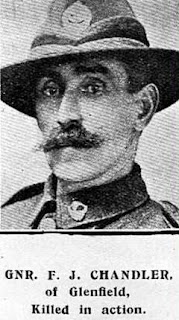 Rifleman Frederick James Chandler embarked on the 27 May 1916 from Wellington headed for England and then onto France.  He was killed in action on the 7 January 1917 in France aged 42.  He is buried at the Y Farm Military Cemetery, Bois-Grenier, Nord, France.  Frederick Chandler was the son of Frederick James and Margaret Chandler, of Brighton, England and husband of Elizabeth Chandler, of Glenfield, Birkenhead, Auckland. 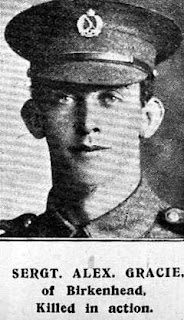 Private Alexander Gracie a Carter before enlistment, embarked on the
8 January 1916.  He time on the front was very short lived he was killed on the15 September 1916 at the Somme aged 23 years.  He is remembered at Caterpillar Valley (New Zealand) Memorial, Caterpillar Valley Cemetery, Longueval, Somme, France. The Caterpillar Valley (NZ) memorial commemorates more than 1,200 men of the New Zealand Division who died in the Battles of the Somme in 1916, and whose graves are not known.

Alexander Gracie was the son of Alexander Hamilton Gracie and Frances Gracie, of Birkenhead, Auckland.