On the Hawera memorial the names of A.C Catchpole and E.W. Catchpole are inscribed. I assumed two brothers so I started to research.

Alfred Cornwall Catchpole enlisted at Mokoia, Hawera 21 December 1914 and embarked with the 3rd Reinforcements, Auckland Mounted Rifles on 14 February 1915. Transferred to the Wellington Mounted Rifles in Gallipoli Alfred was killed in action on 27 August 1915 aged 24 years during the final disastrous attack on Hill 60.  Alfred is remembered on the Hill 60 (New Zealand) Memorial, Hill 60 Cemetery, Turkey.  As a resident of the Hawera district it would seem natural his name appears on the memorial.

E.W. Catchpole led me to Edward Westell Catchpole who seemed to have no affiliation with Hawera. Born in Westport, Edward had been a miner at Blackball when he enlisted.  His next of kin was his sister who resided in Westport.  Why was his name inscribed on the Hawera memorial?  Further research of Catchpole's who served in WW1 led me to Thomas Eric Catchpole who turned out to be the brother of Alfred Catchpole. He too was killed at Gallipoli so one wonders if it is his name that should be on the Hawera memorial?

Thomas Catchpole embarked with the Auckland Mounted Rifles as part of the Main Body on 16 October 1914.  He was killed during the Chunuk Bair offensive on 8 August 1915 and is remembered on the Chunuk Bair (New Zealand) Memorial.  On Papers Past I found several letters from Thomas printed by the Hawera & Normanby Star.  I loved the account in the letter below of how the "Indians" shared their food with him.  I imagine this was his first experience of curry. A strange place and time  to experience a new culinary delight.

The letter above was printed after Thomas had been killed.  Below is a link to a further extract from a letter from Thomas which was enclosed in an unusual manner and highlighted the shortage of paper that soldiers experienced during the war.  Whilst the letter itself was written on paper the envelope was "...a piece of khaki stitched round the edge and fastened by a shirt button."  Kiwi ingenuity at its best!

I discovered a third brother who served at Gallipoli being James Henry Catchpole who also embarked with the Main Body on 16 October 1914 with the Wellington Mounted Rifles.  For James, losing two brothers during the campaign must have been heartbreaking.   I have no doubt all three brothers looked out for each other as a further letter by Thomas printed in the excellent book 'Letters from Gallipoli' edited by Glynn Harper mentions how Thomas "..was very anxious about Jim all Sunday ..., but he turned up Monday morning without a scratch, but with two bullet holes in his cap."  James was undoubtedly the lucky brother and was promoted to Sergeant during the August offensive. He left Gallipoli physically unscathed but I am sure mentally he must have been filled with grief and sadness as he sailed away from the Peninsula where his two brothers laid in unknown graves.

On the Somme James received a Commission on his 21st Birthday the 27th September 1916.  He went on to be awarded a Military Cross at Messines.  Below is the extract from the London Gazette dated 16 August 1917 with the details:

2nd Lt James Henry Catchpole, Pnr Bn.
For conspicuous gallantry and devotion to duty when in charge of a tractor line which was supplying batteries with ammunition he showed the most untiring energy in successfully carrying out the work by day and night, although the line was steadily shelled for over a week and was continually being wrecked.  His fine example was a great inspiration to all ranks.

Whilst on leave in England he married Winifred Mary Chapman.  James survived the war and returned to Hawera with his new wife in 1919.

The mystery still remains as to whether it was Thomas Eric Catchpole, brother of Alfred Cornwall rather than Edward Westrell Catchpole, who should be inscribed on the Hawera Memorial.

Edward Catchpole was invalided out of the war as a result of wounds received in action. He returned to New Zealand only to die of influenza in Westport on 7 November 1918.  He was 45 years old.
Posted by Helen Vail at 9:02 PM No comments:

http://www.scoop.co.nz/stories/CU1305/S00120/ww1-centenary-remembrance-living-floral-carpets.htm
Posted by Helen Vail at 9:53 PM No comments:

I first came across Bugler Bissett when I was researching the Fielding War Memorial
http://100nzmemorials.blogspot.co.nz/2011/05/george-francis-mcg-bissett-feilding.html and was touched by his story.  Below is some further information I unearthed from the 'Papers Past' website which add a real personal touch to Bissett's story.

BUGLER G. BISSETT
HOW HE MET HIS DEATH. LETTER FROM MAJOR CUNNINGHAM.

Mr A. Bissett of Feilding, has received the following letter from Major Cunningham, referring to the death of Bugler George Bissett. The letter is dated May 25:— "Dear Mr Bissett, —Before you receive this note you will have heard officially of the death of your son, Bugler G. F. Bissett, of the 7th Wellington West Coast Regiment. He was killed in the fighting in which our regiment took part on April 27 last. He was in the firing line beside Lieutenant Cross when he was shot in the head, being killed instantly. He was a very willing, well-behaved lad, very popular with his platoon No. 3. composed largely of Feilding boys, and his death caused very general regret. A good many of our brave lads fell the same day, and though it was their first time under fire, they all behaved with the greatest gallantry arid coolness. We recovered your son's bugle which he was wearing at the time of his death. It has several bullet holes in it.  His body was buried during an armistice. The bugle I am forwarding to Lieut.-Colonel Hughes, commanding the 7th Regiment, Wanganui, to send on to you. Speaking for the officer's and men of the regiment serving here, we should all like to see the bullet-marked trophy which your son so honorably carried, installed among our regimental treasures at the headquarters of the regiment, where it would frequently remind the present and future members of the regiment of our brave lad who gave his life tor his country. The ultimate resting place of the bugle we recognise should be decided by you. In conclusion, permit me to convey to you from the officers, n.c.o.'s and men of this company our sincere and heartfelt sympathy with you and your family in their sad loss.

The historic bugle which was being used on Gallipoli by Bugler G. F. MacG. Bissett the young Feildingite who was shot at Kaba Tepe whilst warning his officer against a surprise attack from the Turks, is now on  exhibition in the corner window of Mr I John Cobbe's shop.  All trace of the bugle was lost for 12 months, and then quite unexpectedly it reached Mrs Bissett, mother of the hero; and she has been so good as to allow the shrapnel-torn and bullet-shot instrument to be placed on exhibition.

Below is a link to the Imperial War Museum's excellent podcast series on WW1 part of their First World War Centenary Website. 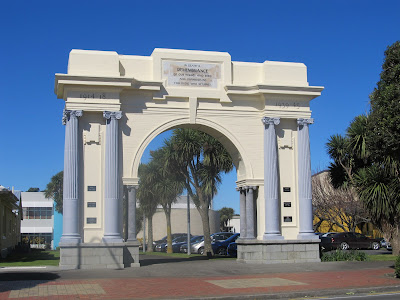 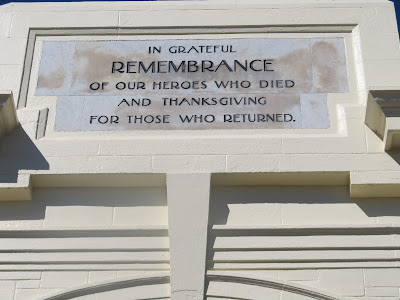 Hawera War Memorial is very impressive I especially like the mention of thanksgiving to those who returned.

The Memorial was unveiled on 12 June 1924 by Prime Minister W. F. Massey with great ceremony on a bright sunny day.

http://muse.aucklandmuseum.com/databases/Cenotaph/2596.detail?Ordinal=1&c_serialnumber_search=4/195
Captain Herbert Christophers was one of four sons of Anthony and Juliet Christophers, Invercargill who served during world war one.  All four were educated at Southland Boys' High and by all accounts were keen sportsmen. 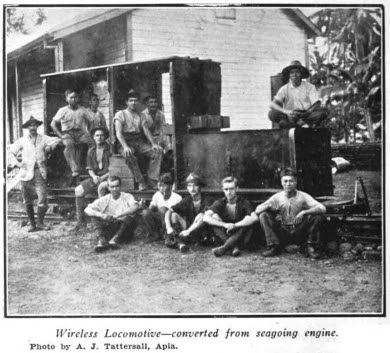 The photo above seems to show Herbert sitting in the centre in front an engine in Samoa.

Herbert return to New Zealand after he contracted Dengue Fever in Samoa and married Mary Dodds at St John's Church in Ohakune in August 1915  They spent a few precious months together before Herbert embarked again this time for France on 9 October 1915.
Meanwhile one of Herbert's elder brothers Victor James Christophers had enlisted embarking with the Otago Mounted Rifles as part of the Main Body on 16 October 1914.  Sadly he was killed in action on 31 May 1915 aged 29 years at No.2 Outpost Gallipoli.  Victor was well liked by his fellow soldiers.  In Terry Kinloch's book 'Echoes of Gallipoli'  Victor's death is recorded by a fellow soldier William Pyle.
'Poor old Vic Christophers was shot dead... last night... Vic's death is hard on any one who knew him.  He was one of the best chaps I ever knew & us fellows who were pals of his are very cut up...'

Victor was buried at the No.2 Outpost Cemetery, Turkey.
Just over a year later Herbert too was killed in action at the Somme on 2 June 1916 aged 27 years. His family in New Zealand would have recently received the news of his promotion to Captain in March 1916 which was then overshadowed by the news of his death a few months later.   He was buried in the Cite Bonjean Military Cemetery, Armentieres, France.

In April 1917, Anthony and Juliet Christophers watched another son embark for France. No doubt they fearing for his safe return.

Julian Anthony Christophers embarked with the 25th Reinforcements on 26 April 1917.   Before enlisting he was employed as a manager at Dalgety and Co. in Wairoa, Hawkes Bay.  He was married with a young daughter.   While serving with the Canterbury Infantry Regiment he was seriously wounded on 5 December 1917 with wounds to his back and abdomen.  He died from his wounds on the same day and was buried in the Lijssenthoek Military Cemetery. Poperinge, Belgium.


Reginald Gillon Christophers a Surveyor and Civil Engineer in Dargaville was married with two sons.  He was the last of the Christopher's sons to embark on 5 June 1918 with the 38th Reinforcements.  Once in the UK he was attached to the Otago Infantry Battalion and left for France early in  September 1918.  Reginald's war was short lived and tragically on 13 October 1918 he died of a neck wound received in action on the same day.  He is buried at Beaulencourt British Cemetery, Ligny-Thilloy, France, he was 36 years of age.

One cannot begin to imagine the grief felt by the families of the Christopher brothers.  For them the war had been devastating.  Remarkably all four brothers have known graves, which may have been of small comfort to their family back in New Zealand.

The story of the brothers was recently brought to life by Lynley Dear the archivist at Southland Boys High School.  In 2010 she published a book called the 'Poppy Boys' which despite the change of surname in the book in based on their lives.
Posted by Helen Vail at 12:54 PM 3 comments: