It may look as if my blog has come to a standstill but that is not the intention.  Since the beginning of the year I have lost my father-in-law and now my grandmother.  I am at the moment in the UK for her funeral.  When life gets back to normal it will be 'full speed ahead'.  Unfortunately I am away for Anzac Day but my family will hopefully be attending the dawn parade at the Auckland War Memorial Museum.

Posted by Helen Vail at 8:13 PM No comments:

Marlborough Express, Volume XLVIII, Issue 187, 11 August 1914, Page 3
While researching the names on a memorial, a standard routine I do is a search on Papers Past to see if any further information can be found on an individual.  I found the above article while researching the Havelock memorial and spotted several names which appear on the Havelock memorial.  I decided to take a quick look at all the men in the article to see how their war panned out.


Edward George Pope enlisted on 15 August 1914 and embarked with the main body on 16 October 1914.  I had already come across Pope while researching the Tasman memorial where I found mention of him in the military record of Sydney Reid Dodson.  Dodson was an orchardist who embarked on 8 January 1916 he was wounded twice before being killed in action on 14 June 1917 in Belgium.  In Dodson's military record there is a note which records how Cpl Pope 6/327 (Edward George Pope) found the dead body of Dodson and removed his identity disc and pay book before burying him.  Pope himself was wounded on 21 September 1916 but recovered.  He was promoted to Corporal in February 1917.  He was the son of George Pope and Edith Twiddle.
Robert John Frost Aldrich enlisted on 7 November 1914 and embarked on 14 December 1914, a traveller by trade he was a married man with 2 children.  Aldrich served throughout the Gallipoli campaign where he was wounded twice.  Firstly on 27 May 1915 receiving a scalp wound and then on 9 August 1915 receiving a wound to the knee and ankle.  Aldrich was shipped back to England in October 1915 with his injuries suffering from shell shock and insomnia.  He was eventually declared medically unfit and returned to New Zealand in July 1917.  He died in 1939 aged 57.
Arnold Edward Wells, a farmer, embarked with the main body on 16 October 1914. He served through the Gallipoli campaign with the Canterbury Mounted Rifles.  He was killed in action at Ypres on 5 August 1917 at an age of 23 years old and is remembered on the Messines Ridge (New Zealand) Memorial, Messines Ridge British Cemetery, Belgium. 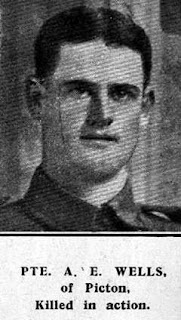 http://muse.aucklandmuseum.com/databases/Cenotaph/16625.detail?Ordinal=1&c_surname_search=wells&c_firstname_search=arnold
Cecil Frank Twidle was one of four brothers who served in World War One.  Cecil, also known as 'Mack', embarked with the main body on 16 October 1914.  He was killed in action on 19 June 1915 at Gallipoli.  I found a letter in the Marlborough Express sent by Edward Pope (same as above) describing how 'Mack' died:
"He was on duty when it happened and was on a bank arranging sand bags when the Turkish snipers saw him.  You will be consoled in knowing that he passed away instantaneously.  He could never have known what had happened or felt any pain.  He was buried the same night and there were twenty-five at the burial.  All were very much cut up as 'mack' was most easily the most popular man in the section"            Taken from the Marlborough Express, Volume XLIX, Issue 191, 14 August 1915, Page 5, Papers Past National Library of New Zealand

Of the other Twidle brothers, James Victor Twidle died of his wounds received in Belgium in August 1917,  Roy Oscar Twidle survived and Lea Onslow Twidle tried to enlist in 1916 but was found to be underage. He eventually embarked towards the end of the war on 2 October 1918 and he too survived.

Arthur Amos Vorbach was the eldest of those at the public meeting at an age of  32 years.  Vorbach had served in the Boer War and was obviously keen to do his duty again. He howver did not enlist until September 1917 embarking in October 1918.  He was now a married man and his first child was born in December 1917.  He served briefly in the Suez before returning to New Zealand in July 1919.  He died in 1954.

Alfred John Anderson also embarked with the main body on 16 October 1914. Before enlistment he had been a farmer for D.O'Dwyer at Mahakipawa in the Malborough Sounds.  Anderson was wounded at Gallipoli on 27 August 1915 and after he recovered he was appointed 'cook' in May 1917.  He returned to New Zealand at the end of the war and continued farming in Mahakipawa.

Wilfred Andrew Warner embarked with the main body on 16 October 1914. He survived the war and returned to New Zealand. I have little information on Warner as his military record has not been digitalised.

Charles Henry Glover enlisted with his brother Alfred Harris Glover on 27 April 1914. They embarked on 14 December 1914 with the Canterbury Mounted Rifles.  On 21 August 1915 the Otago and Canterbury Mounted Rifles were part of an attack on Hill 60 which it was hoped would be captured from the Turks.  The assault was a disaster, ill-planned, conducted in daylight with very little reconnaincense beforehand.  British historian Robert Rhodes James wrote  'For connoisseurs of military futility, valour, incompetence and determination, the attacks on Hill 60 are in a class of their own.'  For the Glover brothers this certainly boar true.  During the attack Alfred was killed in action and Charles was wounded in both thighs.  Once he recovered Alfred joined the NZ Field Ambulance Corp.  He served in France and returned to New Zealand on the troop ship Willochra in April 1919.  His brother Alfred is remembered on the memorial to the missing on Hill 60.  A younger brother William Moir Glover enlisted on 23 August 1915 two days after the death of his brother.  William survived the war.

Charles Valentine Kear embarked with the main body on 16 October 1914. He was wounded at Gallipoli and was invalided returning to New Zealand before the end of the war.  Kear's return to New Zealand was marred with his imprisonment for crimes committed in 1917.  See link to Papers Past for details  http://paperspast.natlib.govt.nz/cgi-bin/paperspast?a=d&d=EP19170519.2.23&l=mi&e=-------10--1----0--.
Many men returned from World War One with what we today call Post Traumatic Disorder Syndrome which could well have accounted for Kear's behaviour.

George Massey Brown  embarked with the main body on 16 October 1914.  As his military record is yet to be digitalised I have little information on him.  He married Agnes Helen Schroder on 6 March 1918 in New Zealand so we can assumed he was invalided home before the end of the war.

Stanley Richard McIssac also embarked with the main body in October 1914. He survived Gallipoli only to die of his wounds on 11 October 1916.  He is buried in the Etaples military cemetery, France. 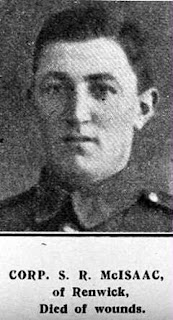 http://muse.aucklandmuseum.com/databases/Cenotaph/9536.detail?Ordinal=10&c_serialnumber_search=6/307
John Marr embarked on 16 October 1914 with the main body but as his military record has not been digitialised again I have little information.  He did survive the war.

The twelve men mentioned in the article 'Havelock Volunteers' had a variety of experiences through World War One.  Some never returned and most survivors were without doubt emotionally and physically scarred for life.  I am sure all originally expected the war it to be a great adventure.  Arthur Vorbach no doubt talked about his experiences in the Boer War to the young men with him at the meeting that evening.  But as we now know the Boer War cannot be compared to the horrors of World War One and I am certain none thought of the horrors that would greet them and of the enormous loss of life that would ensue during the years of World War One.  Their families would no doubt have been proud to see their loved ones keen to do their bit so early on and only later would they wish that their boys could have remained safe with them in New Zealand.

The Marlborough Express newspaper is still running today.
Posted by Helen Vail at 2:20 PM No comments: