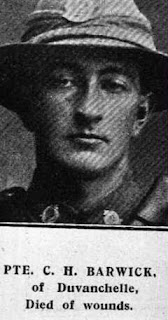 Private Cecil Barwick was a member of the newly formed 1st NZ Cyclist Company which embarked from Wellington on the 'Mokoia' bound for Suez.  On arrival in Suez the company was drilled for two weeks in the early morning and late evening as it was too hot to drill during the day.  The Company then set off for France arriving in Marseilles on the 17 July 1916.  Initially their cycles were not with them and after travelling across France to the North the company who had now joined forces with the Australian Cyclist Company went to the trenches.  The cycles did eventually arrive and where then used as transport from billet to billet.  I  have read that the cycles where used mainly as transport, whilst they were not as fast as cavalry they were a cheaper option.

Private Barwick was wounded on the 7 June 1917 at the Battle at Messines whilst his unit was under heavy shell fire while bridging the Steenbeeque Stream.  After he was wounded it looks like he was transferred to St Omer which was a Hospital Centre.  He died on the 11 June 1917 aged 21 years and is buried in the Longuenesse, St Omer Cemetery.

When looking at pictures of the brutalised landscape of WW1 I am left wondering how the cycles of WW1, without today's modern improvements managed to perform -  it must have been an uncomfortable ride.

Private Barwick hailed from Duvauchelle Bay his parents Joseph and Mary Barwick had two other sons who fought in WW1, they both returned to NZ at the end of the War.
Posted by Helen Vail at 1:31 PM