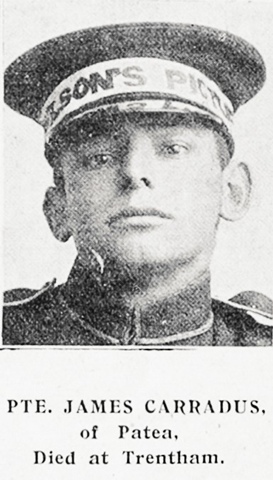 Sir John Grey Special Collection, Auckland Library, AWNS-19170208-44-21
Private James Carradus born in Patea was the son William and Ellen Carradus.  He enlisted on 18 September 1916 when he gave his year of birth as 1896 making him 20 years old.   According to my research like many young men keen to enlist he was most likely younger than he claimed.

William and Ellen were married in 1899 and according to the births, marriages and deaths register they had six children the first born in 1900 and called William. This could well have been James as his middle name may have been James and he was called James to avoid confusion with his father (that's my theory!) This would make James only 16/17 years old when he enlisted too young to go to war.

In December 1915 he married Mary Hannah and in June 1915 a daughter was born (most likely the reason for the marriage so young).

By the end of October 1916 he was at Trentham Camp but within 2 weeks of arriving he had died of Meniningitis at the Cottage Hospital, Trentham.   His body was taken back to Patea and is buried in the Patea Cemetery.  A tragic ending for such a young man.  On the Commonwealth Graves Commission database his age at death is 18 years old.

I would love to know more about the photo of him above.  Looks to me like he is in a cinema usher's outfit, was there a cinema in Patea at this time?
Posted by Helen Vail at 10:45 AM