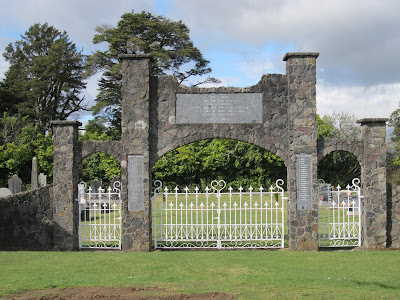 The Raetihi memorial gate is situated at the Raetihi cemetery, 42 men are remembered on the memorial from the surrounding area and some from further afield who came to the area to work in the many sawmills around Raetihi.

Raetihi suffered more than most during the war years as on 18 March 1918 the town was almost wiped out by a disastrous bush fire, a large proportion of the towns buildings and many sawmills were destroyed.

'...farming was badly hit in a district that was busily engaged in conserving winter fodder. Tens of thousands of farm animals were killed, and thousands of hectares of farmland burnt. The sawmilling industry, too, suffered a setback from which it took years to recover. Nine active sawmills were destroyed, making over 300 out of work. Horopito was totally destroyed. More than 120 houses had been lost, 58 of them in Raetihi, and 60 commercial premises destroyed...'