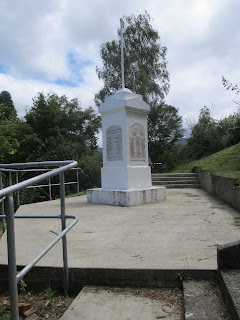 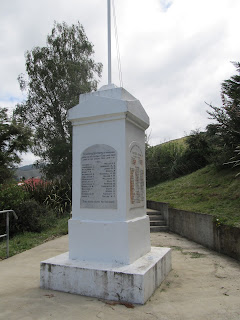 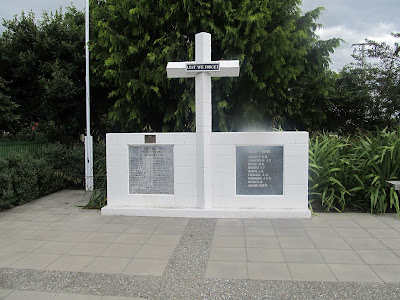 This memorial is not the original WW1 memorial and I am trying to find out what happened to the original follow the link below to take a look.  http://exhibits1.museums.org.nz/collection3RML/exhibit6/e60003a.htm. I have contacted the Renwick Museum to see if I can get some information.
Posted by Helen Vail at 7:58 AM No comments: 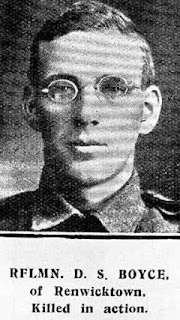 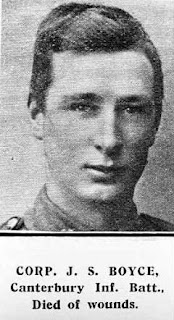 James and David Strachan Boyce were born in Scotland the sons of Robert and Margaret Boyce.  The family moved to New Zealand at around 1907.  Before enlisting James was employed as a Shepherd in Kaikoura and David as a Labourer in Blenheim.

Being the oldest James enlisted first in August 1914 and embarked with the Main Body on 16 October 1914 as part of the Canterbury Infantry Battalion.  On 1 September 1915 he was wounded receiving shrapnel wounds to the legs and back, afterwards he was evacuated to hospital in Alexandria and declared dangerously ill on 9 September 1915.  He died from his wounds on 17 September 1915 and is buried in the Alexandria (Chatby) Military and War Memorial Cemetery in Egypt.  He was 22 years old.

News of his death must have been devastating for his parents back in New Zealand especially as their second son David had now enlisted and was at the time in camp at Rangiotu near Palmerston North preparing to embarked with the New Zealand Rifle Brigade.

Only weeks after the hearing the news of his brothers death David Boyce embarked on 9 October 1915 headed for Egypt.  After becoming ill in the Middle East he spent some time in Hospital in Alexandria where I like to think he was able to visit the place where his brother was buried.  From Egypt David embarked to France in 1916.  On 15 September 1916 on the Somme at Flers he was killed in action.  I found two conflicting reports on how David Boyce died the first is from his military record where a court of inquiry was held after he had been reported missing at which 2nd Lieutenant Martin stated:

"Rifleman Boyce was my  runner and that during the attack at about 9am I sent him with a message from Brown trench to Battalion HQ.  The message did not reach HQ and Rifleman Boyce has not been seen or heard of since taking the message.  A large number of men were killed near Battalion HQ and were so badly smashed they could not be recognised."

I also found a newspaper report on Papers Past from the Marlborough Express dated 30 October 1917 which told a different story:


As David Boyce is buried at Delville Wood Cemetery, Longueval, France it seems unlikely that the above newspaper report is factual.  However as mentioned in the above article their father Robert Boyce did indeed enlist towards the end of the war serving with the Samoan Relief Force.  He was however invalided home before the war ended.  Robert Boyce was most likely driven to enlist by his grief at the loss of his two sons.   'Doing his bit' may well have given him some comfort and purpose.

However the story of the Boyce brothers did not end in 1916 and whilst researching I came across the article below which was printed in the Central Leader in Auckland on 22 September 2010.  The article tells  how Robina Devitt's son found a medal belonging to David Strachan Boyce whilst clearing out some Housing New Zealand Flats in Auckland.  She was hoping to reunite the medal with the Boyce family and trying to locate any living relatives.  I would be very interested to find out if she was successful.

Posted by Helen Vail at 4:20 PM No comments: