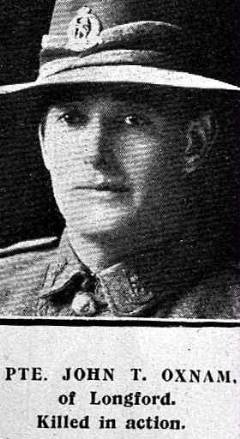 Private John Oxnam caught my attention because we share the same birth date.  He embarked on 14 March 1917 aboard the Ruapehu with the New Zealand Rifle Brigade.  Oxnam's war like many was sadly shortlived he was killed in action on 12 October 1917 at Passchendaele he was 25 years old.

At the time Oxnam was buried in an isolated grave however in 1921 he body was exhumed and laid to rest at Tyne Cot Cemetery.

Evidence of the grief his family felt at his loss is apparent by the notice I found in Papers Past that was publish after his death.


It must have been a comfort to his family to later know exactly where he was laid to rest. I wonder if any members of his family visited him at Tyne Cot?