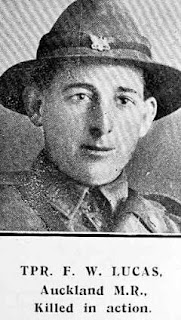 My Great Grandfather fought in World War One his name was Frederick William Lucas so you can imagine how I felt when I looked at the names on the Pukekohe Memorial and saw a F. W. Lucas.  I was even more surprised when on further research I discovered he had the exact same name as my Great Grandfather.

Frederick William Lucas was born on the 27 March 1885, he had already served in the military during the Boer War with the 10th Contingent.  He was keen to serve again  enlisting on the 27 October 1914 and embarked with the 2nd Reinforcements on the 14 December 1914 headed for Gallipoli.  He was killed in action on the 8 August 1915.

My Great Grandfather luckily survived the war and I continue to research his war.  The sight of his name on the Pukekohe Memorial was without a doubt an emotional moment.  I would love to know more about the Frederick William Lucas from Pukekohe maybe one day I will.
Posted by Helen Vail at 6:11 PM