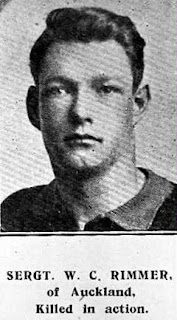 Wilfred Rimmer was born in Auckland the eldest son of Mr. and Mrs. S. L. P. Rimmer of Fairview Road, Mount Eden.  He was a member of the Mount Eden hockey Club and was involved with the YMCA.

Before enlisting on 21 August 1914 he worked as a coffee roaster for his father who was a coffee merchant in Wellesley Street.   Wifred embarked with the Main Body on the 16 October 1914 headed for Gallipoli.

He distinguished himself together with two others at Lone Pine between the 6th - 8th August 1915 and was awarded the Military Medal as reported in the London Gazette on the 11th October 1916:

While 1st Battery was in action on Russell's Top between 6th and 8th August 1915 during the action of "Lone Pine" these three men although slightly wounded on as many as three of four occasions, refused to leave their gun in what was a most critical period of the operations. Although their emplacement received direct hits and was demolished on several occasions, they set to work under fire in order to remove debris and succeeded each time in getting their gun into action again.

Unfortunately such bravery did not give a soldier a ticket to survive the war.  Wilfred Rimmer was sadly killed in action at the Somme on the 17 September 1916 aged 24 years.  He is buried at Thistle Dump Cemetery, High Wood, Longueval.