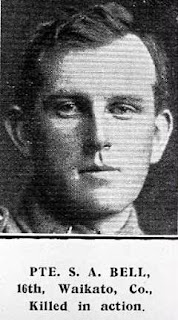 Private Stephen Alexander Bell was born on the 19 January 1891 the son of Alexander and Helen T. Letharn Bell, farmers from Pakuranga.  Private Bell left on his 'great adventure' with the Main Body on the 16 October 1914 and disembarked in Egypt on the 14 December 1914.
When I intially looked at Private Bell's military service record there was very little said about his service, just the usual dates, medical history and personal details.  I almost passed him by and then I thought why shouldn't I mentioned him here in this blog he was one of many ordinary fellows who went off to World War One who didn't return and whose name is now etched in stone on a memorial. I wish I had space and time to mention all those who gave their lives.   All deserve our attention especially as we approached Anzac Day.
Private Stephen Alexander Bell was killed in action on the 8 May 1915 at Gallipoli he is remembered at the Redoubt Cemetery, Helles, Turkey where 1,393 of the burials are unidentified but special memorials commemorate 349 casualties known or believed to be buried among them Private Bell has a special memorial.  (information from CWGC)
Posted by Helen Vail at 5:22 PM