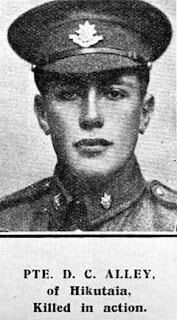 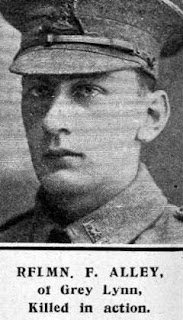 Three of the seven members of the family never returned, two of whom were brothers.

David Clifford Alley was the 6th child of Charles and Emily Alley's twelve children he embarked on 9 October 1915 and was killed in action on the Somme on 26 September 1916 and is remember at Caterpillar Valley Cemetery.

Frederick Alley was the 6th child of Alfred and Clara Alley's thirteen children and cousin of the above.   Before enlistment Frederick was a Slaughterman (probably in Grey Lynn Auckland).  He embarked on the 5 February 1916 and was killed in action on 13 December 1917 at Ypres, Belgium and is remembered at Aeroplane Cemetery in Belgium.

Alfred William Alley was the brother of David Alley and the 4th child of Charles and Emily Alley.  He was living in Australia at the outbreak of war and enlisted with the Australian forces embarking on 24 January 1916.  He was wounded on 26 July 1916 and remained on duty despite his injury.  On 24 April 1917 he was awarded the Military Medal.  Details below:

'For gallant conduct during enemy attack on Noreuil on the morning of the 15.4.17. Bdr Alley went out and unaided carried in a wounded man a distance of about 200 yards across No Man's Land under enemy machine gun and artillery fire. Later when volunteers were called for to go out as stretcher bearers and bring in the wounded this N.C.O. was the first to volunteer and organised his gun detachment into bearer parties.'

He was killed in action on the 20 October1917 in Belgium aged 26 and is remembered at the Bedford House Cemetery.

The three members of the Alley family are also remembered on the Thames War Memorial, Coromandel.   There is an excellent website called 'The Treasury'  http://www.thetreasury.org.nz which has comprehensive details of those on the Memorial.   Below are some moving newspaper articles which mention the Alley family's sacrifice which I found on the Treasury website. 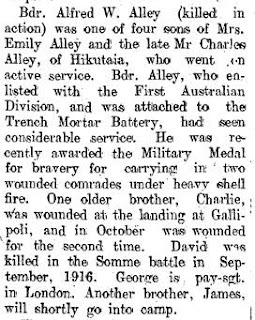