Four sons of Arthur Herbert and Edith Gaskell of Glen Murray, Waikato served during World War One a worthy contribution from any single family.  The first to enlist was George Oscar Gaskell on 10 August 1915.   He served with the Field Ambulance Corp and received multiple injuries on 1 October 1916 and according to his records he never went back to the Front staying in the UK in convalescent camps were he also worked as a dispensary (before becoming a farmer he had been a chemist).  He was discharged from service on 22 May 1919.

Frederick Arthur Gaskell was the second brother to enlist on 5 October 1916.   He embarked with the New Zealand Rifle Brigade (NZRB) on 16 February 1917 aboard the Navua departing from Wellington.  During his service he rose to the rank of Sergeant.   On 15 May 1918,  Frederick Gaskell received a Distinguished Conduct Medal for his efforts - London Gazette entry below:

For conspicuous gallantry and devotion to duty after assuming command of a platoon. He organised his under heavy fire, pressed his attack home, and helped to capture an enemy strong position. He sent back useful information to adjoining troops, and generally displayed initiative and good leadership. 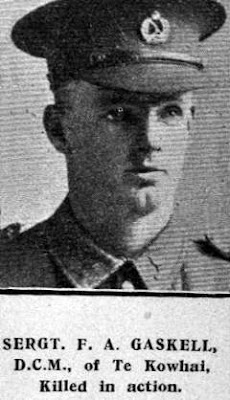 Although considered to be the army's second ranking gallantry award, the DCM was almost always seen as a "near miss for the VC".
On 26 August 1918 during the Battle of Bapaume he received a gun shot wound to the abdomen and died on 28 August 1918.  He was buried at Bagneux British Cemetery, Gezaincourt, France.

Norman Gaskell was the next to enlist on 30 April 1917 and embarked on 13 August 1917 aboard the Mokoia from Wellington with the 29th Reinforcements, E Company.  He marched into Etaples Camp in France on 29 October 1917 and was attached to the Wellington Infantry Regiment on 8 December 1917.  Then on the 6 February 1918 he was admitted to hospital sick.  He remained in hospital for the duration of the war initially with influenza which turned into Bronco Pneumonia.  On the 11 November 1918 the day the war finally ended Norman Gaskell died.  He was buried in Brookwood Military Hospital, England.  Norman was only 22 years old.

The last of the Gaskell brothers to enlist was Percy Gaskell on 20 September 1917 he embarked on 29th Reinforcements E Company aboard the Athenic from Wellington.  He joined 2nd Battalion, Auckland Infantry Regiment in the field on 29 June 1918.  However, Percy spent most of his war until  discharge in and out of hospital with sickness.  He was discharge on 5 August 1919 after returning to New Zealand.
Posted by Helen Vail at 4:47 PM