John C. Smith was born was only 18 years old when he embarked on 27 May 1916 with 13th Reinforcements and part of the Machine-Gun Section (Attached to Mounted Rifles Brigade).  He fought at the Battle of Messines and was awarded a Military Medal for Bravery.  His parents George and Sarah Smith must have been extremely proud of their son.  Then on 13 September 1918 aged 20, John C. Smith was killed in action in France. He is buried at Neuville-Bourjonval British Cemetery, Pas-de-Calais, France.  The Smith family's contribution to World War One was great and none more so than by Lance Corporal John Charles Smith, MM. 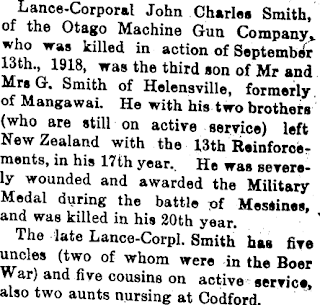 Kaipara and Waitemata Echo , 3 October 1918
Harold James Smith embarked with his brother on the 27 May 1916 in the same unit.  He survived the war.
Posted by Helen Vail at 3:44 PM