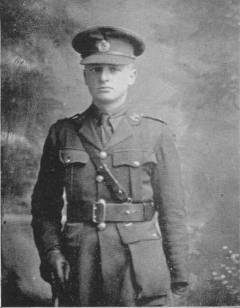 Second Lieutenant Lorie embarked with the Samoan Advance Party on 15 August 1914 he would have been maybe 19 or 20 years old.  After returning from Samoa he embarked  with the 5th Reinforcements as part of the Auckland Infantry Battalion on 13 June 1915.   He served at Gallipoli until the evacuation and once in France served on the Somme and at Messines were he was Mentioned in Despatches for courage and devotion to duty.  Citation below:

Citation for Mentioned in Despatches (MID): "For conspicuous courage and devotion to duty. At Messines on the 7th June 1917, he commanded a platoon and successfully established one of the advanced posts. He showed great coolness and resource and sent back very valuable reports. He has previously done excellent work at the Somme and on the Gallipoli Peninsula." (London Gazette, 28 December 1917, p. 13575, Rec. No. 1204)

After the Somme he was sent to Cambridge to study for a commission.  He was wounded towards the end of the Battle of Messines and was sent on a short leave to recover before being sent back to the front.  Second Lieutenant Lorie was killed in action on 28 December 1917 at Ypres aged 23 years old.  Second Lieutenant Lorie is a fine example of a brave young man who (like many) survived some of the memorable campaigns of World War One and whose luck ran out.  He gave his all and despite his life being a short one, he contributed greatly to New Zealand which should not be forgotten. 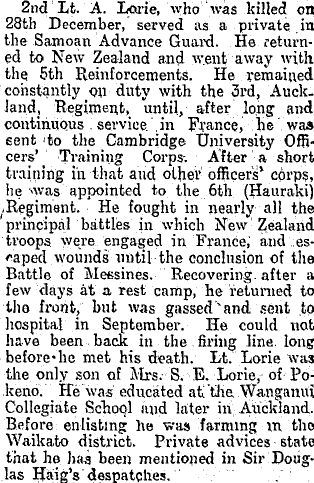