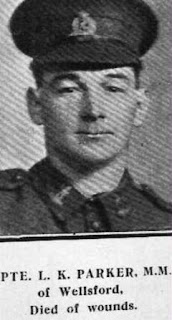 Lewis Parker enlisted alongside his brother Kenyon (Ken) Parker they embarked together on the 11 October 1916 aboard the 'Tofua' from Wellington headed for Plymouth.  Lewis Parker was awarded a Military Medal for bravery on 12 October 1917.

London Gazette, 14 January 1918, p847, Rec No 1507: For conspicuous gallantry and devotion to duty. During the attack on Belle Vue Ridge on 12th October this man as Stretcher Bearer carried wounded men from the front to Regimental Aid Post continuously fro 36 hours, working under the most intense barrage of machine gun and heavy artillery, and showing an absolute contempt for danger. He saved many lives

Less than a year later he died of wounds inflicted at the Second Somme on 25 August 1918 he 29 years old.  He is buried at Bagneux British Cemetery, Gezaincourt, Somme, France.

His brother Ken Parker was invalided home after seeing action both in Egypt and at the Somme.   A younger brother Joseph Lawrence Parker embarked later in the war on the 13 June 1918, he survived the war. 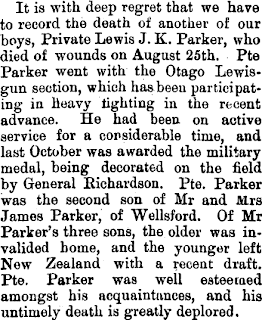 When I get a look at the military records of the Parker Brothers I will be able to update the information.
Posted by Helen Vail at 3:02 PM