Jospeh Vipond, known as 'Joey' was the son of Joseph and Ella Vipond of Matakana.  Joey Vipond never embarked overseas he died of disease on the 10 July 1916 at Upper Hutt Hospital, his parents were with him.  He is buried in Matakana Cemetery. 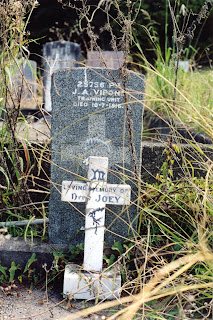 I found some moving reports of Joey's death as he was obviously a well respected member of the Matakana community.  Joey was one of many young men who died of disease before they got a chance to go into battle and their effort should be thought of as no less than those who did.
'He has done his duty by his country and given his life in her cause,
just as much as though he had died from a bullet in the trenches.
He fills an honored soldier's grave.'

The above words are taken from a report on Joey Viponds funeral. 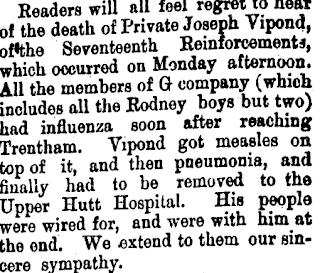 Rodney and Otamatea Times, Waitemata and Kaipara Gazette , 12 July 1916, Page 4
Joey Vipond was one of seven Vipond's from the region who served in World War One.
Posted by Helen Vail at 12:27 PM