He initially embarked with the Canterbury Mounted Rifles as part of the Main Body on 16 October 1914.  A letter he wrote to his parents while on Gallipoli reported on the death of Trooper McMahon and was printed in the Marlborough Express: 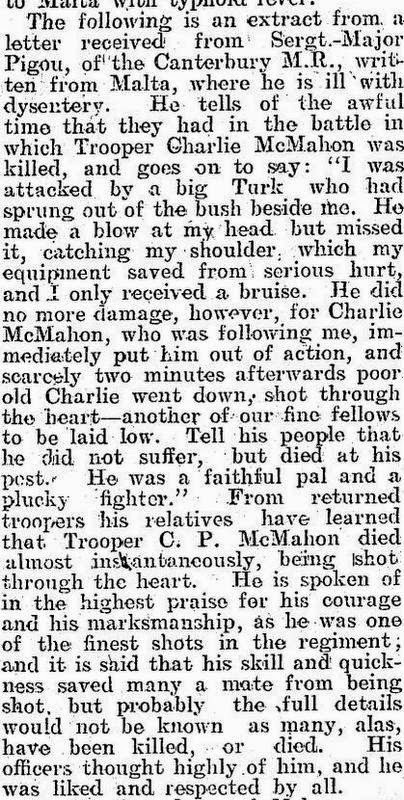 Before the evacuation of the Gallipoli pennisular Arthur fell ill and was invalided back to England.  Once recovered he returned to New Zealand and gained a commission.  He then once again embarked with on 31 May 1917 with the 26th Reinforcements returning to the Middle East where he continued to serve until the end of the war.    After surviving the war his family back in New Zealand must have been full of hope of his return however Arthur tragically died on 12 December 1918 from influenza.  He was buried at Chanak Consular Cemetery, Turkey.

I found an obituary for Arthur Pigou in the Marlborough Express and these words below taken from it sum up the tragedy of his death and those who died from influenza after the war ended.

"His death will be widely regretted and it is an event invested with particular sadness in view of his lengthy services for King and country and the fact that hostilities have ceased."
Marlborough Express, 17 December 1918, pg 5.
Posted by Helen Vail at 11:51 AM