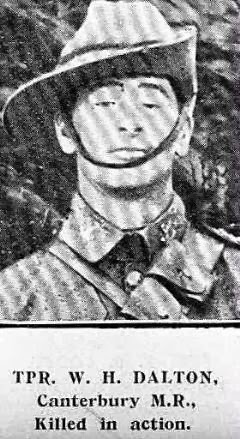 Trooper William Henry Dalton was the son of William Henry Dalton and Annie Dalton.  Prior to enlisting William had been farming with his family at Canvastown, Marlborough.  He embarked on 16 October 1914 with the Canterbury Mounted Regiment as part of the Main Body.   William was killed in action at Walkers Ridge, Gallipoli on 19 May 1915 aged 30 years and is buried at No. 2 Outpost Cemetery, Turkey.

His father William Henry Dalton died in New Zealand aged 63 in the same year only a few months after his son's death.   I wonder how much the grief of his son's death contributed to his own death?