The Men of the Bannockburn Memorial 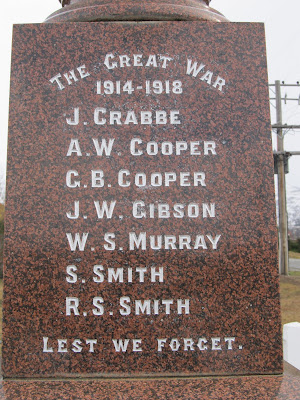 Private James Crabbe son of James Crabbe Senior and grandson son of Captain Thomas Bruce Crabbe of Bannockburn.  Embarked on 13 November 1915 with the 8th Reinforcements, Otago Infantry Battalion.  Killed in action on 12 October 1917 at Ypres as is remembered on the Tyne Cot Memorial. His brother Thomas Alfred Crabbe embarked with the Main Body on 16 October 1914, wounded at Gallipoli he survived the war and died in 1983.
Private Andrew Winnick Cooper a Miner from Bannockburn was the son of John and Mary Cooper emmigrants from Scotland. Before enlisting in April 1917 he married Sarah Todd in January 1916 and a daughter was born in December 1916.  Private Cooper embarked  on 14 July 1917 on the Waitemata from Wellington with the 28th Reinforcements, New Zealand Rifle Brigade.  He was killed in action on 9 September 1918 at Havrincourt, France aged 25.  Private Cooper is remember on a special memorial at Gouzeaucourt British Cemetery.  (In the cemetery 381 of the burials are unidentified but there are special memorials to 34 casualties known or believed to be buried among them).
Private George Begg Cooper brother of Private Andrew Cooper embarked on the 9 October 1915 with the 7th Reinforcements, Otago Mounted Rifles.  Private Cooper who at the end of the war was serving with the New Zealand Maori (Pioneer) Battalion died of disease in France on 9 December 1918 and is buried at Etaples Cemetery, France.  It is a tragic, sad twist when a soldier who survived the horrors of WW1 then dies of disease after Armistice.
Private James William Gibson was the son of Ellen M. Gibson, of Bannockburn, Otago, and the late James L Gibson was a miner at the time of his enlistment.  He embarked on 5 April 1917 on the Devon from Wellington with 24th Reinforcements, Otago Infantry Battalion.  He was killed in action at Ypres on 12 October 1917 and like so many others remembered on the Tyne Cot Memorial. 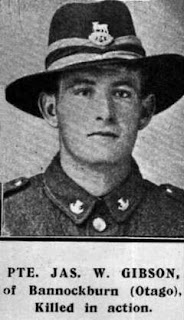 Rifleman William Scott Murray was the son of Henry and Alice Murray, of Bannockburn, he embarked with the New Zealand Rifle Brigade on the 9 October 1915.  He died of his wounds on 8 February 1917 in France, aged 21 and is buried at the Faubourg-d'Amiens Cemetery, Arras.
Trooper Robert Stanley Smith enlisted in Bannockburn and left with the Main Body on 16 October 1914 with the Otago Mounted Rifles. He was killed in action on either 6 or 7 August 1915 at Chunuk Bair and is remember of the Chunuk Bair Memorial.
I could not find S. Smith who is also mentioned on the Bannockburn Memorial.  I would love to know who he is if anyone knows or has further information on any of the men remembered on the Memorial please let me know.
Posted by Helen Vail at 11:03 AM