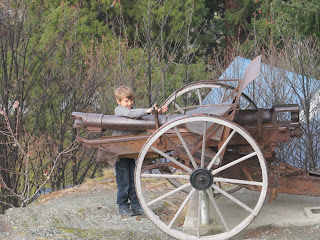 Next to the Arrowtown Memorial is a Turkish field gun, a German made model, 1903, 75mm it was  one of 558 delivered to Turkey between 1903 and 1907 by the German munitions company FRIEDRICH KRUPP at the Essen factory.  Partially destroyed, the gun was captured in the Middle East between March 1917 and September 1918.

The gun was one of many artefacts brought back to New Zealand as part of a plan to develop a national war memorial in Wellington.  Artefacts were distributed around the country and the Arrowtown Town Board applied for the gun which they received in 1921.  The Memorial was unveiled in 1923.
The above information is taken from 'Arrowtown war memorial ', URL: http://www.nzhistory.net.nz/media/photo/arrowtown-war-memorial, (Ministry for Culture and Heritage)'
Posted by Helen Vail at 7:49 AM