On 19 January 1917, the troopship 'Ulimaroa' embarked from Wellington headed for Plymouth, England.  On board were the 21st Reinforcements which included three brothers who before enlistment were all shepherds from Arthur's Point, Queenstown.

For their parents Charlotte and Daniel Fitzpatrick it must surely have been an emotional time to have farewelled three sons together headed for a War which had already taken the sons of many Queenstown families .  Some comfort may have been taken by the knowledge that the three brothers together would have each other to look out for.  I am sure that the sadness of their departure was also mixed with the pride of having three sons doing their bit for 'King and Country'. 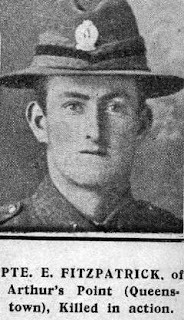