Corporal Mostyn Fleming was born in Mostyn Cottage, Arrowtown on 10 June 1879 the third son of James and Elizabeth Fleming.  His father was the gold receiver and Clerk of the Court in Arrowtown until 1884 when he was moved to Cromwell to carry out the same role.  Before enlisting Corporal Fleming was a town clerk for the Alexandra Borough Council.  He embarked from Wellington on 5 April with the 24th Reinforcements, Otago Infantry Regiment, D Company and died of his wounds on 12 October 1917 (like so many others on that ill-fated day).

In the Settlers Museum in Alexandra there is a large framed photograph of Corporal Mostyn Fleming.

Evening Post, Volume XCIV, Issue 130, 29 November 1917, Page 7, National Library of New Zealan
Corporal Rhyl Vaughan Fleming brother of Corporal M. Fleming (as mentioned in the above article) was killed in action on 15 November 1916 at the Somme.  Corporal Rhyl Fleming had embarked on 8 January 1916 and before enlisting had been a stock buyer. 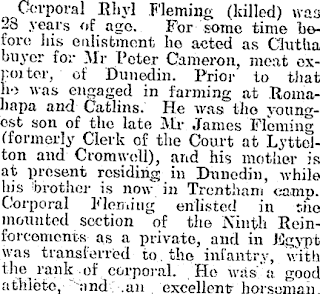