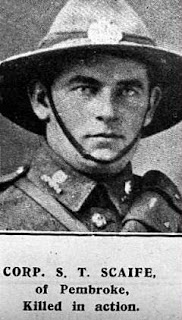 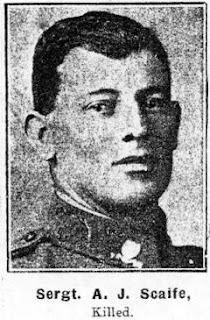 Arthur Scaife was the first of the brothers to embark from Port Chalmers with the Main Body attached to the Otago Mounted Regiment and served throughout the Gallipoli campaign.   His brother Stanley embarked with the Otago Mounted Regiment on 14 August 1915 with the 6th Reinforcements although it is unclear whether he too served at Gallipoli as I have not been able to check his military records.  It does seem he joined the Pioneer Battalion and was posted to France.  On the 15 September 1916 the New Zealand Division took part in its first major action near Flers, as part of the Somme offensive. In 23 days of constant fighting 1560 New Zealanders were killed and 5440 were wounded. (source: http://www.army.mil.nz/culture-and-history/nz)  Stanley Scaife was killed in action on the first day of this action.

After the death of his brother Arthur transferred to the Otago Infantry Regiment most likely as the newspaper report below implies as a result of his brothers death at the Front, maybe hoping in some way to avenge Stanley's death.  After surviving Gallipoli Arthur's luck ran at at Passchendaele and he was killed in action on the 18 October 1917, only days before the NZ Division was relieved by 3rd Canadian Division on the 23rd October 1917. 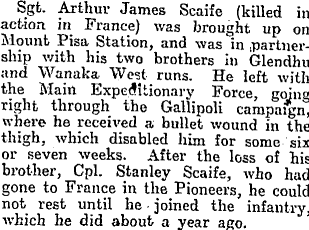