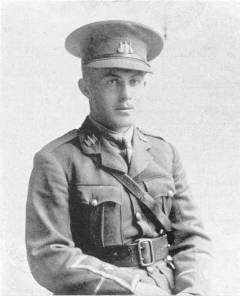 Malcom Beattie was the son of  Cyril Robert and Ethel Beattie, of 22 Fitchett Street, Palmerston North.

On leaving school in 1914 he headed for England to pursue a medical career something I am sure his parents would have been very proud of.  However war beckoned Malcolm and he enlisted whilst only 19 years old.  Below is an account of his outstanding military record despite his young age.

"Who left School at the end of 1914, sailed for England in the following February with the intention of entering upon a medical career. Like many others, he was unable to resist his country's call, and obtained permission to enlist at the age of 19. He joined the O.T.C. Camp and was finally gazetted 2nd Lieutenant in the Royal Berkshire Regiment, with headquarters at Portsmouth. Leaving for France at the end of October, 1916, he was in the firing line about a week later, and there remained, with occasional intervals, up to the time of his death. For rescuing a wounded man from the German lines he was decorated by the King of the Belgians when in England on leave in the following August. Returning to France, we hear of the splendid work he did up to the night of October 15th, 1917, when he was mortally wounded and died at a clearing station about three miles to the west of Arras. While with us here he upheld the very highest traditions of school life, leaving behind him an example of all that was best and noble in a boy's life." (In Memoriam, 1914-1918 [Wanganui Collegiate School])