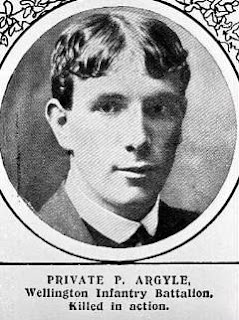 Percival Argyle and his brother Leonard Charles Argyle enlisted together most likely in Palmerston North.  They embarked together on the 14 February 1915 part of the 3rd reinforcements from Wellington.  On the 8 August 1915 a fateful day in New Zealand's Gallipoli history they were both killed in action -  one wonders if they were together then also.  Like so many killed on that day they have no known grave and both are remembered on the Chunuk Bair (NZ)Memorial.

Percival and Leonard were the sons of Henry and Alice Argyle,
Posted by Helen Vail at 2:51 PM