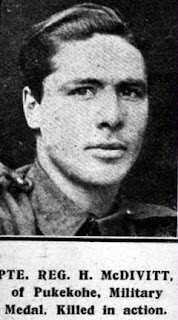 Private Reginald McDivitt embarked on the 17 April 1915 with the 4th Reinforcements, Auckland Infantry Battalion.  He served at Gallipoli before moving on to the Western Front where  he was awarded the Military Medal for devotion to duty below is the report from the London Gazette dated the 16 August 1917 on how he won his medal:

"Messines Offensive - 7th to 9th June 1917. For devotion to duty. As linesman of the signallers he went out during the heaviest bombardments to repair the lines. He worked continuously and by sticking to his work enabled communication to be kept. He worked regardless of his own safety."

He was sadly killed in action only weeks later on the 25 July 1917 and is buried at Mud Corner Cemetery, Comines-Warneton, Hainaut, Belgium.  Reginald McDivitt was the eldest son of William McDivitt of Pukekohe.  His brother Frank McDivitt a well known Jockey at the time also served on the Western Front and survived the war.
Posted by Helen Vail at 10:42 AM