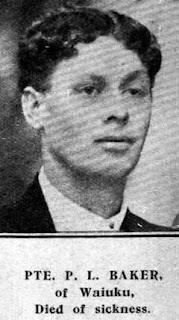 Private Phillip Baker was a working as a butcher for H.Barnaby in Waiiuku before enlisting on the 23 April 1917 and embarking on the 15 August 1917.  He died on the 10 May 1918 aged 31 of Cerebral Spinal Meningitis and is buried at the Wavans British Cemetery, Pas de Calais, France.  Phillip Baker was born in Russell in the Bay of Islands and was not the only member of his family to serve in WW1 he had three brothers who also took part.

Theodore Russell Baker a bushman before enlistment embarked on the 2 April 1917.  He was wounded in France on the 5 October 1917 with gun shot wounds to the throat and left arm.  He was discharged from hospital on the 17 October 1917 and sent back to France.  After only a couple of days back in the field he was once again admitted to hospital with suspected German Measles.  He never return to the Front being eventually transferred back to New Zealand on the 14 March 1918 and then  discharged from service being no longer fit for duty on the 6 June 1918.   He married in 1919 but it was a short lived marriage as Theodore Baker died in Whangarei Hospital on the 7 March 1921 as a result of his service in WW1.

Varley Howard Baker was also a bushman before enlistment he embarked on the 27 May 1916, four months later he was wounded in the field in France with a gun shot wound to his left leg.  He died a few days later on the 5 October 1916 aged 20 years and is buried at Heilly Station Cemetery, Mericourt-l'Abbe, Somme, France. 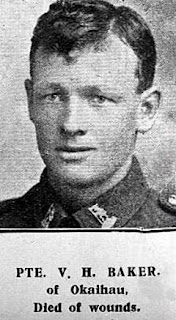 Arthur Wilmott Baker another bushman before enlistment was the only one of the four brothers to survive WW1.  He died in Auckland in 1949.

The mother of these four men must have been devastated to have lost three sons as a result of WW1 one can only imagine the pain of her loss.
Posted by Helen Vail at 1:45 PM