Men from the Little River Memorial 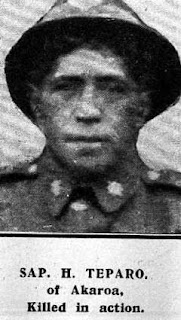 Hohepa Teparo embarked on the 16 October 1916 aboard the Wilochra as part of the 9th Reinforcements, 3rd Battalion, G Company.  He was killed accidentally after being thrown from a horse in Belgium on the 26 August 1917 he was 29 year old.  He is buried at the Calais Southern Cemetery in France. 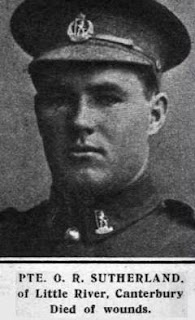 Private Oscar Robert Sutherland a Bushman before enlistment.  He  embarked on the 14 July 1917 aboard the Waitemata as part of the 28th Reinforcements.  He died of his wounds on the 30 March 1918 (Easter Sunday) aged 22 years at the Somme during New Zealand's reponse to the German Spring Offensive from the 26 - 30 March 1918.  He is buried at Gezaincourt Communal Cemetery Extension, France. Trooper Reginald Frank Birdling embarked with the Canterbury Mounted Rifles with the Main Body of the NZEF on the 16 October 1914.  He was headed for Gallipoli where he was killed on the 6 or 7 August 1915.  He is buried at Embarkation Pier Cemetery, Turkey.
Posted by Helen Vail at 11:49 AM