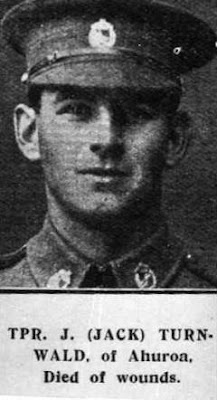 Trooper John Francis Turnwald was the son of Bartly and Annie Turnwald, of Puhoi.  He too like Trooper Parry embarked on the 13 June 1915 with the 5th Reinforcements as part of the Auckland Mounted Rifles.  Once in the Middle East however, Trooper Turnwald like several mounted troopers joined the Imperial Camel Corp.   The Imperial Camel Corp (ICC) is probably one of the least known units of the First World War  which was made up of troops from New Zealand, Australia, India and the United Kingdom.  The ICC were not only used in battle but also for the transport of supplies.

To learn more about the ICC or the Cameliers as the men who served in the Corp were know, follow the links below to the NZ History website and the NZ Mounted Rifles (NZMR) website.  The NZMR site has some great original photographs of the ICC.

There is also a publication called 'With the Cameliers in Palestine'  written by John Robertson who served in the 16th Camel Company (a NZ company).  The book was first published in 1938 but has since been republished.

Trooper Turnwald was wounded at El Arish in Egypt and died of his wounds on 6 June 1917 aged 23 years old, he too is buried at Kantara Memorial Cemetery in Egypt.

The Turnwald family sent five members to the Great War and at the time there was some confusion as to if they were all brothers.  I can find five listed on the Cenotaph database but they seem as if they were most likely cousins.  Below is a newspaper account which reports the confusion, although I am not to sure their conclusion is correct. 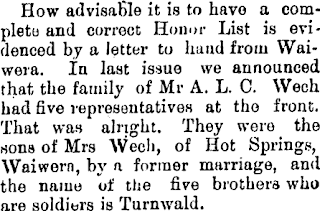 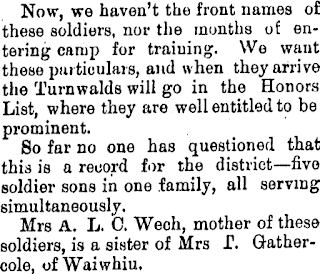 Anyone out there know the facts of this story?
Posted by Helen Vail at 5:01 PM