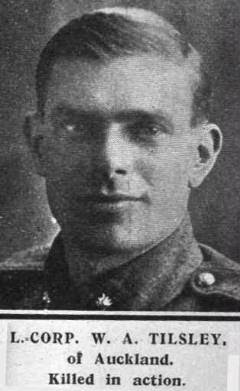 http://muse.aucklandmuseum.com/databases/Cenotaph/15814.detail?Ordinal=5&c_surname_search=tilsley
At first I couldn't find a record for Lance Corporal Walter Alexander Tilsley on the Auckland Cenotaph database.  I did a search on Papers Past and found mention of a Tilsley in the 'Poverty Bay Times' who had been brought to the attention of Sir Joseph Ward in an instance of gallantry deserving of the Victoria Cross.  The article mentioned how an electrician from Rotorua called Tilsley went into no mans land with the Germans only yards away to bring back a wounded comrade.

Extract from Papers Past, National Library of New Zealand, Wellington
Could this be the Tilsley I was looking for?  Not quite.  The Tilsley mentioned above was Walter's brother Robert Tilsley.

Walter Tilsley embarked on the 15th November 1916 with the 13th Reinforcements, 1st Battalion, E Company.  He was sadly killed in action at the  Second Somme on 28 March 1918.   He is buried at Euston Road Cemetery, Colincamps, Somme, France.

His brother Lieutenant Robert Tilsley had embarked with the Main Body on 16 October 1914.  He served at Gallipoli where he was awarded a DCM.  The award citation is below with a link to a newspaper report of the incident.

'For conspicuous gallantry on the night of the 4th-5th June, 1915, on the occasion of a sortie from Quinn's Post (Dardanelles). An enemy trench had been carried by assault, but was enfiladed by the fire of a machine gun. Sergeant Tilsley commenced to build up a sandbag traverse, and notwithstanding that the sandbags were being constantly blown away by the enemy's bombs, he, with great courage and regardless of danger, continued his efforts until he was severely wounded.
http://www.london-ga...upplements/8866
http://paperspast.natlib.govt.nz/cgi-bin/paperspast?a=d&cl=search&d=HNS19151104.2.4&srpos=53&e=-------10--51----2tilsley-- 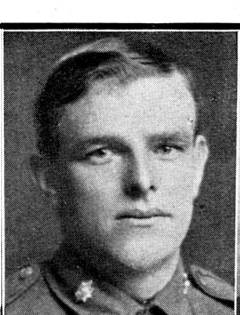 Lt. Robert Tilsley
He received a commission in Egypt after the evacuation and proceeded with the NZ Forces to France where he took part in the Somme and Messines battles after which he was awarded the Military Cross. He was presented with his MC by the King at Buckingham Palace on the 10 July 1918.

Robert was wounded three times - once in Gallipoli and twice in France.  There is more detail regarding Robert Tilsley on the Cenotaph database which indicates he also served in WW2.   Link below:
http://muse.aucklandmuseum.com/databases/Cenotaph/27672.detail?Ordinal=4&c_surname_search=tilsley

I found an amusing article about a report from London where Robert Tilsley was filmed along with Cyril Bassett VC for an NZ film.  I wonder if this film still exists in some archive today?
http://paperspast.natlib.govt.nz/cgi-bin/paperspast?a=d&cl=search&d=PBH19151206.2.15&srpos=34& e=-------10--31----2tilsley--

Two brothers from one family, one killed in action the other a war hero who survived WW1.  I am sure the war hero would had given up all his accolades to have had his brother survive the war.
Posted by Helen Vail at 7:56 PM