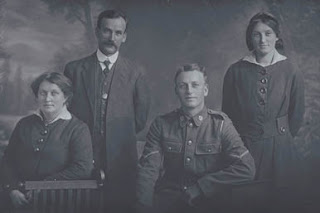 Clarence with his mother, stepfather and sister (I think) 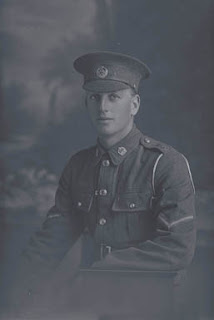 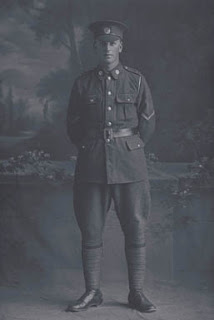 Clarence Tarlin was the son of Clara and Alexander Tarlin.  His father had fought in the Boer War and died in 1901 when Clarence would have been only 5 years old.  Before enlistment Clarence worked as a Labourer for the Auckland City Council,Waterworks.  He enlisted on the 3rd May 1916 and embarked for the War on the 19 August 1916 aboard the Aparima.

According to his records Clarence was wounded on the 21 February 1917 and reported missing.  It turned out he was actually captured by the Germans at Haubourdin in the Sailly Sector.  He died the next day from a gun shot wound to the abdomen.  In his records it states he was taken to the POW camp at Lemburg, Germany.  I wonder if he actually made it there as he was so badly injured.  He was 20 years old.

I found the photographs of  Clarence very evocative he had such a gentle look it is difficult to imagine him being thrust into the hell of WW1.   Clarence will definitely be remembered by myself.
Posted by Helen Vail at 11:28 AM