I nearly overlooked Cadet Williams as there was no record of him on the Auckland Museums Cenotaph database. However further research led me to the article below:

Cadet Williams was born in Clevedon in 1897 the youngest of five children. He attended Clevedon School and his mother Phyllis was the post mistress at Clevedon post office.

When war was declared in 1914 he was serving aboard the 'Aparima' a fleet officer training ship which carried up to 50 cadets.   At the beginning of the war the 'Aparima' operated as a troop ship, before being requisitioned by the British authorities to act as a cargo ship.  As the ship would now be operating in war zones parents of cadets were given the option of removing their cadet sons (who ranged in age from 15 - 19 years) from the ship.  As a result 14 cadets were removed.  Cadet Williams however was one of those who stayed.

On the night of the 18/19 November 1917 the 'Aparima' was sailing to the Welsh port of Barry to take on coal, when it was torpedoed by a German submarine UB40.  Reportedly the 'Aparima' sank quickly.  Of the 110 men on board 56 lost their lives including 24 New Zealanders one of whom was William Harry Williams.  Seventeen cadets from New Zealand and Australia lost their lives as a result of the sinking of the 'Aparima'.

The sinking of the 'Aparima' and the loss of  the young cadets who were not even entitled to draw pay was a  tragedy.  The cadets were young boys far away from their families who should not have been at war.

In total 13 New Zealand cadets lost in the disaster and they are remembered on a Tower Hill Memorial in London.

The 'Aparima', still lies on the sea floor, a few kilometres off the English coast. The ship's 4.7-inch gun, mooring cable and anchor are visible to divers who explore the wartime wreck today. 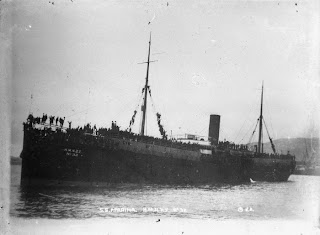