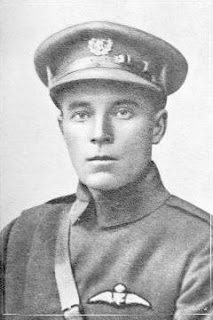 According to a newspaper article Herbert Cooper was the youngest of his Honor Mr Justice Cooper.  He was educated at Kings College in Auckland. Being interested in engineering, he took up a position with the Manawatu railway workshops in Wellington.  Poor health forced him to change he career and after a period of studying farming at Lincoln College he took up a bush site at Waitetuna between Raglan and Hamilton.  After two and half years farming in 1913 Herbert took off to England to the Graham White flying school.  At the outbreak of war  he volunteered his services and became the first Zealander to join the Royal Flying Corp in England.

I found an article from the Evening Post dated 13 May 1914 about Herbert Cooper and how after gaining his airman's certtificate he returned to New Zealand, but was once again returning to England.  the article went on to say "Mr Cooper's future plans are not yet decided but he will in all probability visit France to see the progress of aviation there..."  He would indeed visit France a few months later but not as a tourist!

Herbert Ambrose died in France on 21 June 1916 aged 29 how he died I have still yet to confirm.
He was a member of the 11th Squadron Royal Flying Corps and some research into this squadron should shed some light.
Posted by Helen Vail at 5:30 PM