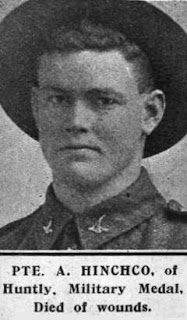 Alfred Hinchco from Huntly was the son of John and Rachel Hinchco he embarked on the 26 June 1916 for France he was 20 years old.  He won a Military Medal in 1917 below is his citation mentioned in the London Gazette:
London Gazette, 17 December 1917, p13201, Rec No 1401: For conspicuous gallantry in the Field, east of St Julien on the 4th October. At the commencement of the attack, when our advancing lines were held up by determined resistance, he rushed his Lewis Gun up, and under intense fire, bought his gun into action. He then, single handed, rushed to close quarters and compelled the surrender of a shell hole strong point, containing a German Officer and 12 other ranks. His action enabled the line to advance, which otherwise was in danger of losing its barrage. Throughout the whole action, he showed splendid skill, and entire disregard of personal safety.

For his family this was their 2nd son they had lost Alfred's brother William had died in the Huntly Ralph Mine disaster  in September 1914.
Posted by Helen Vail at 3:41 PM