The Messines offensive in Belgium began on 7 June 1917 and was a victory for the Allies, which came at a cost.

The offensive began at 3.10am when 19 huge mines were detonated under the German trenches.  The explosion was the largest and loudest of its time and it is said it could be heard in London.  10,000 Germans were killed as a result of the explosions.

Allied casualties to begin with were light but as the Germans began to reorganise themselves the number of casualties grew.  By 9 June, 1917 when the New Zealand Division was relieved it had suffered 3,700 casualties, 700 of whom died.

Remembered below are five young New Zealand men all aged 25 who are listed on the Eketahuna Memorial and were killed in action on 7 June, 1917 at Messines.

Rifleman Edwin Christensen was the son of Danish immigrants  Lauritz and Nielsine Christensen, of Putara, Eketahuna, he worked with his father on the family farm at Putara.  Edwin Christensen enlisted on 29 May, 1916 and embarked from Wellington aboard the 'Devon' on 25 September, 1916 with the New Zealand Rifle Brigade.   The ship arrived at Devonport, England on 21 November, 1916 and the troops were marched into Sling Camp on the same day.  Whilst at Sling camp Edwin qualified as a marksmen.  On 7 June, 1917 Rifleman Christensen was killed in action at Messines aged 25 and is remembered at the Messines Ridge (New Zealand) Memorial, Messines Ridge British Cemetery, Belgium. 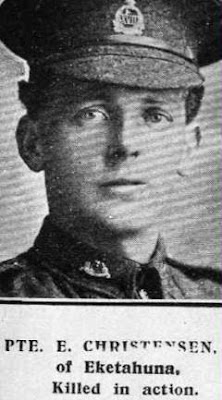 Lieutenant John Wesley Cobb was the son of Harriet Sophia Cobb and the late Mr Cobb of Palmerston North.   He worked as a carpenter for A.G. Hoar of Eketahuna and was keen to enlist doing so on 19 August, 1914 at Masterton and embarking with the Main Body on the 16 October 1914.  At Gallipoli he was wounded receiving a gun shot wound to the thigh. 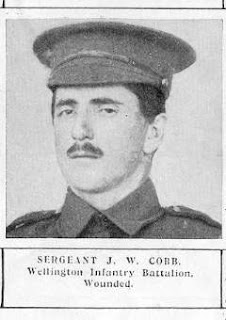 After he recovered he rejoined his unit on 28 August, 1915 and was promoted to Company Sergeant Major on New Years Day 1916.  Before embarking for France he was transferred to the Auckland Infantry Battalion and promoted to 2nd Lieutenant.

Once in France 2nd Lieutenant Cobb was attached to the 1st Australian Tunnelling Company - his carpentry skills would have been put to good use building the supports in the tunnel shafts and later he was attached to the NZ Tunnelling Company.  During January 1917 he rejoined the Auckland Infantry Battalion in the field and in May 1917 was promoted to a full Lieutenant.  At Messines on 7 June, 1917 aged 25 years he was reported missing believed dead and then on 9 June, 1917 confirmed killed in action.  He is remembered at the Messines Ridge (New Zealand) Memorial, Messines Ridge British Cemetery, Belgium. 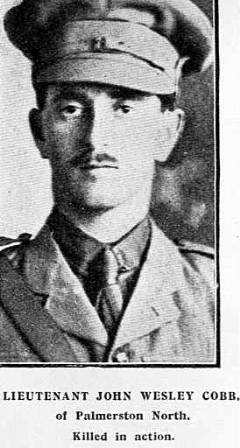 By the time of his death Lieut. Cobb was an experienced soldier who had seen much action.  The photograph of him printed in the Auckland Weekly News after his death shows a man much changed from 1915.  In the photo above Lieut. Cobb is gaunt looking and his eyes have a sad, haunted look about them, reflecting the horrors he has witnessed.

Below is a notice from the Poverty Bay Herald reporting his death.  The relative mentioned at the end of the notice was George Lynch Cobb http://100nzmemorials.blogspot.co.nz/2011/07/private-george-lynch-palmerston-north.html a cabinet maker from Palmerston North and a member of the NZ Medical Corp who drowned at sea whilst aboard the hospital ship 'Marama' during a storm on 27 May 1917:

Advice has been received in Palmerston that "Lieut. John Wesley Cobb, son of Mrs Cobb, and brother of Mr R. C. Cobb, of Palmerston, is missing, and is believed to be  killed. Lieut. Cobb was a Main Body man, with a long record of service. He was a carpenter by trade and enlisted when war broke out from Eketahuna. He was in camp at Awapuni with the Main Body as a sergeant in the Ruahine Regiment. He was wounded on Gallipoli, and after recovering returned in time for the evacuation. Later he went to France, where he saw heavy fighting, and won a commission. He was transferred to the Australian Tunnellers, eventually joining the 1st Auckland Infantry Battalion, 15th company. His relatives will have general sympathy in their loss, especially as it follows closely on the reported death of another member of the family on active service.

Private Thomas Edward Hodgins son of Thomas and Mary B. Hodgins, of Cambridge St., Pahiatua and a farmer embarked on 15 November, 1916 with his brother Charles Henry Hodgins both were assigned to the New Zealand Rifle Brigade. On 7, June 1917 aged 25, Private T. Hodgins was killed in action at Messines and like many others is remembered on the Messines Ridge (New Zealand) Memorial, Messines Ridge British Cemetery, Belgium.

Private Graham Groves Matheson the son of William Brooklyn Matheson of Tiratahi, Eketahuna was the sole school teacher at Pirinoa.  He initially volunteered in 1914 but was rejected as medically unfit because of eye trouble.  However he finally embarked on 26 June, 1916. Once he reached France he was attached to the 1st NZ Light Trench Mortar Battery.  He was killed in action on 7 June, 1917 at Messines, I found a small account of his death posted on the New Zealand Electronic Text Centre, Victoria University, Wellington and the delightful picture of the man himself below:

... he got safely through with the rest of his gun crew, and they had dug themselves in, but the German gun fire in the night was very heavy, and he was killed by a shell.

Lance Corporal Enoch Sutton born in Darlington, England came to New Zealand in September 1914 aboard the 'Ruahine" most likely as an assisted immigrant. As his mother was a widow and had six children to care for Enoch likely left hoping for a better life.  He found work as a grocer's assistant for A.H. Herbert in Alfredton but soon enlisted on 15 February, 1915.  He embarked with the Wellington Infantry Regiment on 14 August, 1915 and arrived back in England in September only a year after he had originally left.  Wounded in action on 20 July, 1916, once recovered he rejoined his unit at the end of August 1916.  He was killed in action on 8 June 1917 at Messines aged 25 years and is buried at the Messines Ridge, British Cemetery, Belgium.  After his death his mother came to New Zealand in 1921 and settled in Lower Hutt.  I also discovered his younger brother Stanley Sutton had also immigrated to New Zealand and served with the NZ Division and survived the war.