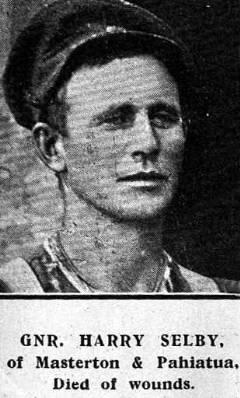 Harry Selby was the son of Edwin and Mercy Selby born in Masterton on 6 January 1882.  He was fair haired and blue eyed and from all accounts an outgoing and well liked member of the Masterton community.  He worked as a carpenter for the firm Coradine & Whitaker and was an active member of the volunteer Masterton Fire Service.

He enlisted in August 1914 and embarked with the Main Body on 16 October 1914, serving throughout the Gallipoli campaign and then on to the Western Front.  In July 1917 he was awarded the Military Medal for his actions on 2 June 1917 - below is an extract from a letter from Gunner Selby printed in the Wairarapa Daily Times, on 21 September 1917 entitled 'A Masterton Hero'.  I love the line in the letter where he states "It was a fire so I had to be there" his years in the fire brigade certainly put to good use.  He seemed humble about his own award even embarrassed.

London Gazette, 18 July 1917, p7291, Rec No 744: "At Wulverghem on 2nd June 1917. When hostile guns were heavily shelling the Battery position a shell landed on a dump of boxed ammunition causing the boxes to ignite. The fire obtained a good hold and a second explosion seemed imminent, when Fitter Selby and Gunner Belton accompanied by their officer rushed to the dump, and, regardless of the fact that the heat was causing shells to explode on all sides, separated by burning boxes from those untouched. When water arrived they ably assisted their officer to extinguish the fire. A heavy explosion resulting in the loss of several lives and the almost certain discovery of the Battalion position was thus averted."

Gunner Harry Selby was seriously wounded on 4 October 1917 at the Battle of Broodseinde in Belgium and died the next day on 5 October 1917 he is buried at Mendinghem Military Cemetery, Poperinge, West-Vlaanderen, Belgium, below is his obituary with the title 'Masterton Hero" a title he surely deserved.

In Gunner Selby's military record I found a small newspaper clipping of a letter written by the father of Gunner F.D. Bell it is a moving account of how Selby saved his son's life.  Gunner Bell survived the war thanks to Harry Selby.