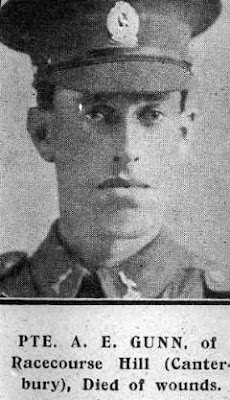 Whilst coming to the end of my research of the names on the Darfield memorial I came across the two men who not only embarked but were killed in action at the same time.
Private Alexander Errol Gunn a farmer and Private Thomas Alexander Harrison a shepherd both embarked aboard the 'Navua' on the 16 February 1917 with the 22nd Reinforcements, Canterbury Infantry Regiment, C Company.   They were both killed in action on the 12 October 1917 at Ypres, Belgium aged 27 years and 23 years respectively.
Their enlistment numbers also followed each others Private Gunn's was 38280 and Private Harrison's 38281 which would mean they enlisted together.
One could assume they were both friends or at least knew each other.  I like to imagine they were very good friends, who brought true meaning to the phrase "brothers in arms".
Posted by Helen Vail at 1:45 PM