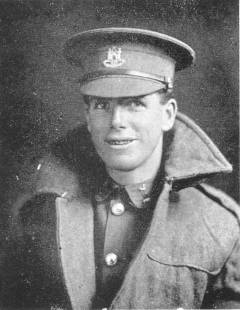 William Bey was the only son of Dr William and Eveline D'Ainslie Bey of Greytown he embarked on 26 April 1917 with the 25th reinforcements aboard the Tofua from Wellington.  He was killed in action on 25 August 1918 at Bapaume aged 32. Below are two accounts of his life and death:

"Killed in action on August 25th, 1917 [sic], enlisted as a private in the 1st Battalion Otago Regiment, and left with the 25th Reinforcements. Before his death he had attained the rank of Sergeant, and the same morning had taken part in a stunt to capture a certain objective close to Bapaume, when he was mortally wounded by a bursting shell. As he was brought in to R.A.P. he gradually but quietly sank, and was buried near the village of Biefvillers close to the scene of his last fight. He studied electrical engineering in Wellington after leaving school, but later relinquished it in order to farm the Springbank Estate, Gladstone. His demeanour under the most trying conditions was always excellent. He knew no fear, and died as he had lived, a brave man, caring for nothing but the knowledge that he had done his duty." (In Memoriam, 1914-1918 [Wanganui Collegiate School])

Sadly for the Bey family more sorrow follow only weeks later when William's father (Dr W Bey) died from the influenza epidemic on 14 November 1918.   His son William is remembered on his headstone.

Gunner James Kay Strang with whom Bey had been given a 'hearty send off' survived the war but lost his brother Captain John Donald Kay Strang at the Somme on 15 September 1916 aged 22 years.  He had a distinguished military record being mentioned in dispatches twice.  John Donald Kay Strange is also commemorated on the Carterton Memorial.