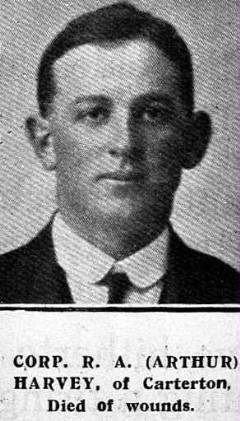 Robert Arthur Harvey (known as Arthur) and his brother James Harvey the sons of Thomas and Eleanor Harvey of Carterton worked as teamsters (truck drivers today) before enlisting together on 14 June 1915.  Both embarked with the 7th reinforcements on 9 October 1915 attached to the Wellington Infantry Regiment and I imagine they stayed together throughout.  On 4 October 1917 they would have both been present in Belgium at the Battle of Broodseinde.  Robert Harvey was awarded a Military Medal for gallantry during the battle. His citation reads:

"East of Ypres on the 4th October 1917 this N.C.O took command of his Platoon after his Platoon Officer was wounded. Throughout the action he displayed the very greatest courage and good leadership, leading his men against and capturing several enemy fortified shell holes. His utter disregard for danger and devotion to duty were a splendid example to his men. He was severly wounded shortly before reaching the objective but refused to be carried out, knowing the demand for stretcher bearers, and finally struggled down alone to the Regimental Aid Post. A fine example of devotion to duty." (London Gazette, 17 December 1917, p. 13201, Rec. No. 1358)

It is hard to imagine how he managed to get himself to the first aid station despite suffering serious gunshot wounds to the side of his body.  I have read several accounts of the Battle of Broodseinde. The two that stand out are Monty Ingram's  published diary titled 'In Flanders Fields' and the other is from Len Coley's diary published by his grandson Allan Marriott titled 'Mud Beneath my Boots'. Both give a vivid account of the horrors and the awful conditions soldiers suffered during the battle and how difficult it was for the stretcher bearers to carry the wounded back to medical stations.   Despite his gallant efforts, sadly Arthur Harvey died of the wounds he received in the Battle of Broodseinde on 7 October 1917, he had just turned 24 years old.

James Harvey continued to serve in Belgium with the Wellington Infantry Battalion but was killed in action at Ypres, Belgium on 29 November 1917. James was 22 years old.

As I have said many times before it is hard to imagine how the family felt losing two of their sons so far away from home and at such a young age.