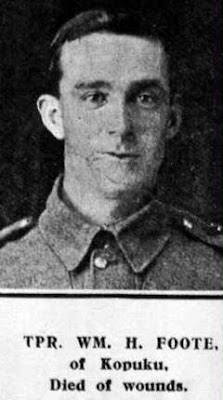 William Henry Foote was born in Dorset, England.  I have not been able to discover when he came to New Zealand  but it was sometime after 1910 as he married Agnes Gosney at Sherbourne, Dorset in May 1910.  He worked as a farm hand in Mercer before he enlisted on 28 June 1915 and then embarked with the 6th Reinforcements as part of the Auckland Mounted Rifles on 14 August 1916.  He remained  in the Middle East for the duration of his war which was plagued with illness being hospitalised with Dysentry, Malaria and Neurasthenia (Shell Shock).    William Foote was wounded on 27 March 1918 with a gun shot wound to head and pronounced dangerously ill clinging onto life until the 11 April 1918.  He is buried in the Ramleh War Cemetery in Israel.
On William Foote's military record he stated he was unmarried and records his brother James Foote (living in Ngtea) as his next of kin.  Why? there are many scenarios as to why William came to New Zealand we can only guess.  His wife Agnes was noted later on his records as his next of kin, there was also a daughter listed who was born on October 1910 in Dorset.  Both stayed in England and I wonder how Agnes found out that William had been killed in action. It is sad to think of a little girl growing up never knowing her father, but as we all know it is often the children who suffer most as a result of war.
Posted by Helen Vail at 11:24 AM