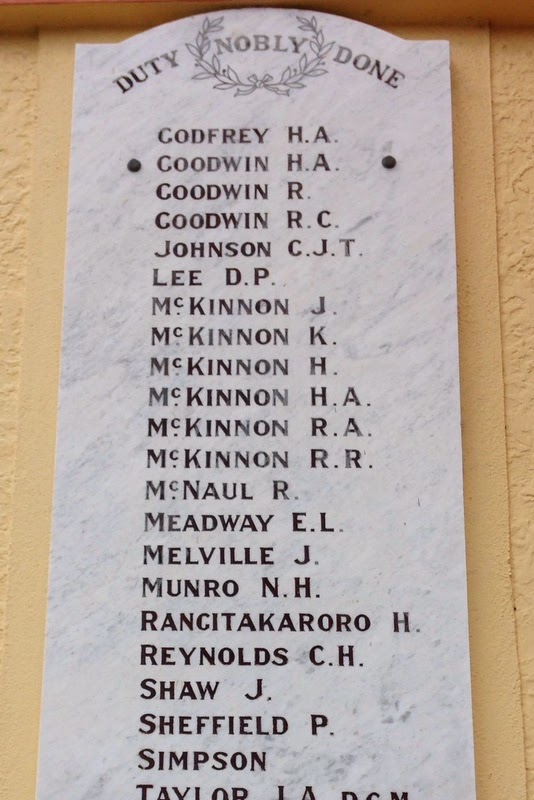 It is always tragic to find a memorial were several members of one family are mentioned and on the memorial plaques at Pirongia the names of six McKinnon cousins (two sets of brothers) are inscribed in remembrance.
In 1873 when Roderick McKinnon arrived in New Zealand with his family from the Isle of Skye in Scotland to farm at Te Rore in the Waikato he could not have known that decades later six of his grandsons would pay the ultimate price in a global war not imagined in his lifetime.

When the war broke out in 1914 William McKinnon was the only remaining son of Roderick's still farming in Te Rore and over the course of the war he saw three sons leave to fight.  The first to leave was John McKinnon who embarked with the Auckland Mounted Rifles (AMR) on 14 February 1915, with his brother Kenneth (Ken) McKinnon following shortly after on 13 June 1915 with the Auckland Infantry Battalion (AIB).

On 8 August 1915 both took part on the assault on Chunuk Bair at Gallipoli, firstly Ken with the AIB and then John later the same day with the AMR.  John would have passed many dead, dying and wounded men on his way to the summit and could well have passed his brother Ken who had been killed earlier in the day. Tragically before the day was finished John would join Ken as one of the many New Zealanders who died that day.  Ken was only 20 years of age and John 24 years old. Both are remembered on the Chunuk Bair (New Zealand) Memorial, Chunuk Bair Cemetery, Gallipoli, Turkey.


In a tragic twist of fate a third brother Robert Roderick McKinnon who had emigrated to Canada in 1907 was killed in action three years later on the same day 8 August 1918 at the Battle of Amiens while serving with the 43rd Battalion, Canadian Infantry.  He was 29 years old.  The circumstances of his death are recorded on the Canadian War Graves Register:

'Was advancing with his company and when on the slope in front of "Dodo" Wood they were held up by machine gun fire.  Private McKinnon rushed forward to put the gun out of action when he was killed by a bullet.'

Donald McKinnon (Williams's brother) was farming at Kaipaki ,Ohaupo, Waikato and he too saw three of his sons embark for WW1.  The first was Roderick Angus McKinnon who was a school teacher at Rotorangi, Cambridge at the outbreak of war.  In 1906 he had married Majorie Clements and together they had six children the youngest born in May 1916 only weeks before Roderick embarked for war aboard the Tahiti on 26 June 1916 with the Auckland Infantry Battalion.  Once at Sling camp he was transferred to the Otago Infantry Battalion and posted to France.  After a spell at rest camp at the beginning of July 1917 Roderick rejoined his battalion on 16 July 1917.   On 31 July 1917 Roderick was killed in action at Ypres, Belgium.  He is buried at Ploegsteert Wood Military Cemetery, Comines-Warneton, Hainaut, Belgium.  For his wife back in New Zealand the news of her husbands death would have been devastating as she was now a widow with 6 small children the youngest only a baby.  One can only imagine her sense of loss.

Malcolm McKinnon was also a teacher at the outbreak of war at Helensville. He enlisted in July 1917 and embarked with the Wellington Infantry Regiment aboard the Mokoia on 1 August 1917.   Malcolm was also serving on the front at Ypres, Belgium at the end of July 1917.   I wonder if he ever knew that his brother had been killed in action on 31 July 1917 especially as Malcolm himself was killed in action the following day on 1 August 1917.  Malcolm's body was never recovered and he is remembered on the Messines Ridge (New Zealand) Memorial, Messines Ridge British Cemetery, Belgium.


The last of the McKinnon boys to embark from New Zealand for war was Murdoch Alexander McKinnon. Murdoch had been farming with his father at Kaipaki prior to enlisting in December 1916. He embarked with the New Zealand Field Artillery aboard the Turakina on 26 April 1917. Murdoch was killed in action on 14 March 1918 on the Somme being only 21 years old.

The McKinnon's family loss during WW1 was profound and one that should not be forgotten.  As we begin the commemoration of the centenary of WW1 stories such as the McKinnon's become all the more important in helping us to remember the sacrifices made by our ancestors during WW1.