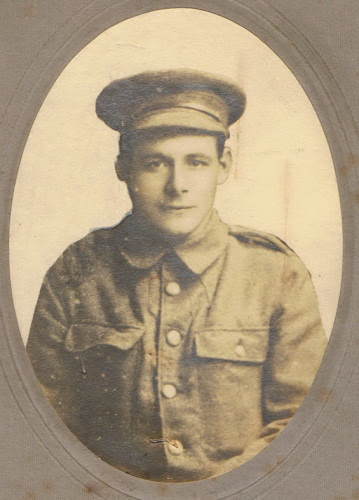 George Hardley (known as Ted) was the youngest son of George and Mary Jane Hardley.  He was born in Westport in 1895 and at the outbreak of war was living in Ponsonby, Auckland working as a Post and Telegraph lineman.  Keen to serve he enlisted only days after war had been declared on 11 August 1914.  His brother Issac a plumber in Hawera enlisted on the same day.   Within no time  George was on his way with the Auckland Infantry Battalion by train to Wellington where on the 15 August 1914 he sailed with the Samoan Advance Party arriving in Apia on 29 August where they were met with little resistance from the small German garrison stationed there.  The main risk to the New Zealand troops during their stay on Samoa was disease such as Malaria and Dengue Fever.  My husband's great grandfather Reginald Evatt who was also part of the Advance Party contracted Malaria whilst on Samoa.

The Samoan Advance Party consisted of approximately 1400 soldiers all volunteers from the Zealand Territorial Force.  They spent eight months on German Samoa and most went on to the Middle East or France afterwards, including George Hardley.  At the end of the war 210 of these men had been killed in action or had died of their wounds, 163 died in France and George was sadly one of these.

After Samoa George served at Gallipoli and then on the night of 6 April 1916 he embarked on the Franconia for France with the 1st Auckland.   Not long after his arrival he was killed in action at Armentieres on 16 May 1916 and was buried at Cite Bonjean Military Cemetery, Armentieres, France, he was 21 years old.

Below is a picture of his original grave which I have kindly been given permission to use from his family. 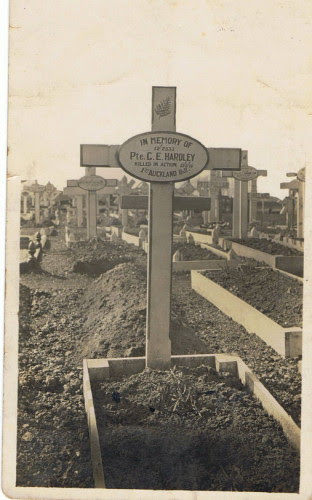 For many who enlisted early in the war it was a chance for adventure and George certainly got to see some of the world serving in Samoa, Middle East and France (if only for a few weeks).   His older brother Issac survived the war invalided back to New Zealand in March 1916 and a further brother Victor after initially being found medically unfit enlisted again and remained at Trentham camp.
Posted by Helen Vail at 10:20 AM