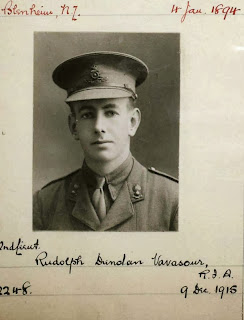 Rudolph Dunstan Vavasour was the second son of Henry and Bertha Vavasour's twelve children.  His father Henry was the 3rd son of Sir William Vavasour of Harewood Castle in Yorkshire (the family were descended from Saxon nobility) after arriving in New Zealand in 1871 he took up sheep farming in the Marlborough area where he purchased Ugbrooke Station in 1897 which comprised of  13,000 acres in the Awatere Valley.   The Ugbrooke homestead is today a boutique accommodation. http://www.ugbrooke.co.nz

Rudolph (known as Rollo) was a Stock Agent of W.G. Turnbull in Masterton before he voluntarily enlisted with the NZ Army in March 1915 however, on his military record it states he was discharged before serving overseas on personal grounds (it does not elaborate as to what these grounds were).

Whatever the reasons for his discharge he was not to be deterred from enlisting and he took himself to England arriving in June 1915 where he obtained a commission in the Royal Field Artillery (RFA).  He time with the RFA was also short lived as he transferred to the Royal Flying Corp at the beginning of 1916.  From all accounts he saw a good deal of action in the air as his obituary taken from the Otago Daily Times illustrates before he succumbed to ill-health:

After a period of convalescing he took up the role of flight instructor then in January 1917 he was admitted to the Royal Flying Corp hospital at 37 Bryanston Square, London with an appendicitis unfortunately the operation to remove the appendics proved fatal and he died on 16 January 1917.

He was buried with full military honours at St Thomas of Canterbury, Fulham, London, SW6 7HW.  Sadly for the Vavasour family back in New Zealand he was not the first member of their family to be buried at St Thomas's.  Henry and Bertha Vavasour's fourth daughter Bertha was attending boarding school in London when after a short illness she suddenly died on 17 March 1915 aged 17 years.  She was laid to rest at St Thomas of Canterbury and I imagine the brother and sister are buried together.

Meanwhile back in New Zealand Henry and Bertha Vavasour's eldest son 2nd Lieutenant George Marmaduke Vavasour was set to embark with the New Zealand Rifle Brigade on 14 March 1917.  George was amongst the attacking force at Passchendaele on 12 October 1917. He was killed in action and like many who fell that day he has no known grave. His passing is remembered on the Tyne Cot Memorial, Belgium.

While researching the story of Rudolph Vavasour is occurred to me that this story could have been one we see so frequently on our TV screens or read about in a book.  An ancient English family of noble origins settling in the hinterland of New Zealand. No doubt the family has many stories to tell apart from their tragic loss through WW1.