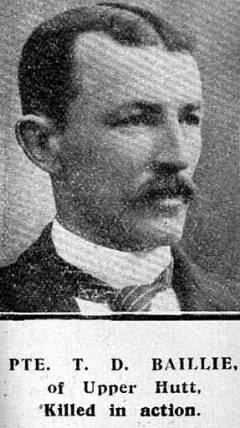 http://muse.aucklandmuseum.com/databases/Cenotaph/578.detail?Ordinal=20&c_surname_search=baillie
Thomas Douglas Baillie enlisted on 21 August 1916 and enlisting alongside him was his only son, Arthur Douglas Baillie.  On Thomas Baillie's military record I noticed a note which mentioned how he had left all his property equally to his wife, daughter and son.  Besides the son's name was a military number 34324 (his father's number was 34325) which I traced to Arthur Douglas Baillie.  I was initially stunned to find that father and son had enlisted together I imagine there would have been very few cases of this during WW1.  At enlistment Arthur gave his date of birth as 22 March 1896.   His father stated that Arthur's date of birth was 1897 while in fact Arthur was born in 1898.  Lying about his age made him eligible for overseas service.

Father and son embarked on the Apawa on 2 January 1917 as part of the Auckland Infantry Regiment.  One can only imagine the sadness Thomas's wife, Alice Baillie felt when both her son and husband departed together for war.

On 4 October 1917 Arthur Baillie was promoted to Lance Corporal on the very same day his father Thomas was killed in action at the Battle of Broodseinde.   He was 45 years old and he is remembered on the Tyne Cot Memorial.

On 9 September 1918 Arthur was badly injured after receiving a gun shot wound to the head and was sent back to England where he received treatment until finally returning to New Zealand on 18 January 1919.   Despite his injury he recovered sufficiently to return to the England where he joined the RAF becoming an officer.  I found a record of an Arthur Douglas Baillie from Otorohanga who unfortunately was killed in a flying accident over Eastchurch, Kent on 13 September 1924 aged 26 years.

Further research into the Baillie family revealed that the family had a rich military history.  Thomas's father Colonel W.D.H. Baillie had served in the Punjab Campaigns in India of 1848–49 and his grandfather Lieutenant-Colonel Thomas Baillie had been a veteran of the Battle of Waterloo.  In fact Colonel W.D.H Baillie led a full life and below is a link to more information on his life.
http://www.teara.govt.nz/en/1966/baillie-william-douglas-hall/1
Posted by Helen Vail at 4:10 PM