Evan Innes-Jones was one of five brothers who served in World War One and the son of Herbert and Mary Innes-Jones.  Originally born in Nelson in 1889 the family moved to Kihikihi where they farmed.  Evan embarked with the Main Body on 16 October 1914 as part of the Auckland Mounted Rifles.  At Gallipoli he was wounded on 22 August 1915.  I found a detailed account of how he was rescued in a letter from Evan printed in the Colonist Newspaper.

Colonist, Volume LVII, Issue 13915, 22 October 1915, Page 4,
Papers Past, National Library of New Zealand, Wellington
The wound was serious enough for him to be sent back to New Zealand to convalesce.  However as soon as he was able, he reported for duty again after gaining a commission and being promoted to 2nd Lieutenant in May 1918.  He embarked on the 1 August 1918 with the 42nd Reinforcements.  Sadly shortly after disembarking in England on 4 October 1918  he fell sick.  He was transferred to Channock Chase military hospital on 2 November 1918 and died of pneumonia on 8 November 1918.  He is buried in the Channock Chase military cemetery.   Evan Innes-Jones story has a tragic end after serving his country at the beginning of the war at Gallipoli he was keen to serve again towards what would be the end of the war only to be struck down by disease as were so many in November 1918. 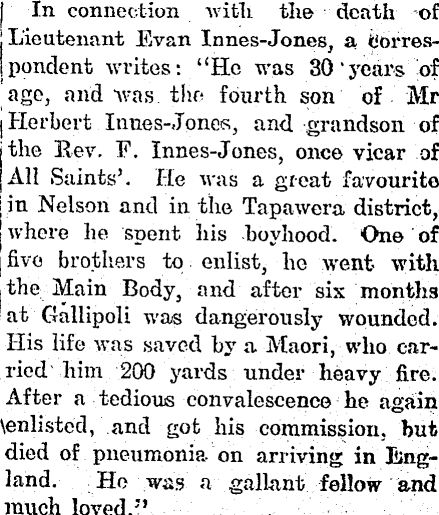 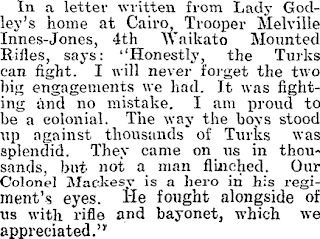 The Innes-Jones family made a significant contribution to World War One and one the family I am sure were rightly proud of despite the loss of Evan Scott Innes-Jones.
Posted by Helen Vail at 12:24 PM