Percy Collison was born on the 17 December 1894 the son of Edward and Georgina Collison well known farmers in the Rakaia area.  Percy enlisted on the 18 October 1915 and embarked aboard the 'Manganui' on the 8 January 1916 as part of the 9th Reinforcements Canterbury Mounted Rifles, C Squadron. According to his military records he was slightly wounded twice during his service. Percy survive the war only to succumb to illness 16 days after Armistice was declared.  He died on the 27 November 1918 at the 3rd Scottish General Hospital in Glasgow from Broncho Pneumonia.  He is buried at the Western Necropolis Cemetery in Glasgow.

For his family this was not their first casualty of war a second son Hugh Edward Collison had died previously on the 16 June 1902 from an accident in the Boer War again shortly after Armistice was declared on the 31 May 1902.  In 1917 Percy Collison's father Edward had died while he was serving overseas. To make matters even worse for Georgina Collison (Percy's mother) and the rest of the family a daughter Georgina died from influenza only days before Percy died on the 23 November 1918.

The grief felt by their mother must have been enormous. To lose your husband and 2 children in such a short time frame is unthinkable.  Below is a newspaper clipping from the Ashburton Guardian on Percy's death. 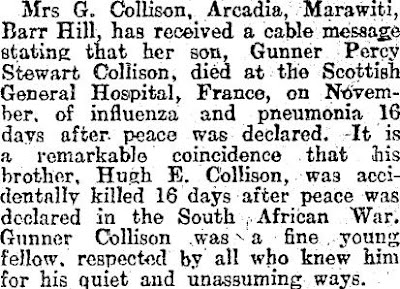 The newspaper cutting below is a lovely insight into how recruits were fare welled by their communities and in what high regard those recruits were held. As well as being a happy reminder of those like Percy Colllison who never returned. 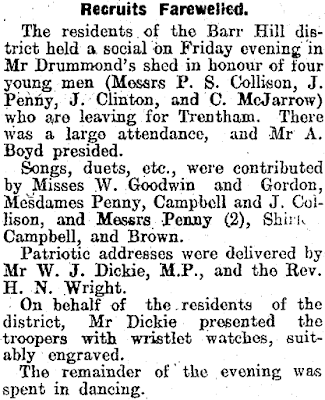 As far as I can ascertain the other recruits mentioned in the above article return from the war safely.
Posted by Helen Vail at 2:48 PM