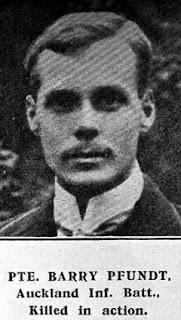 Barry Pfundt was born in England to Rudolf and Isabel Pfundt (nee Barry). His father was a  German immigrant who moved to England in the early 1880's where he worked as a merchants clerk.  Barry was the 3rd child of six and the family lived a comfortable life in Surrey.
Barry emigrated to New Zealand in 1904 aged about 17 years.  He made a trip back to England in 1911 where on the passenger list he states his occupation as an engineer.  He enlisted at Waikino, Ohinemuri and most likely worked for the Waihi Gold mining Company.  He embarked with the 3rd Reinforcements on the 14 February 1915, less than two months later he was killed in action at the Gallipoli landings on the 25 April 1915.
It must have very difficult for his father to deal with the loss of his son with the extra knowledge of knowing that his son had been killed in a campaign supported by the country of his birth.
Posted by Helen Vail at 10:14 AM