More men from the Arrowtown Memorial 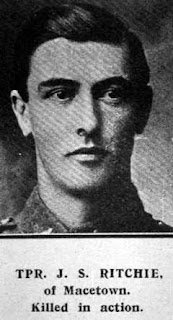 Trooper James Sangster Ritchie born in 1894 was the son of Beresford and Janet Ritchie.  Enlisting at the age of 21, Trooper Ritchie embarked with the 7th Reinforcements, Otago Mounted Rifles on 9 October 1915 headed for Gallipoli.  After surviving the Gallipoli campaign he was killed in action on 24 November 1917 at Ypres. 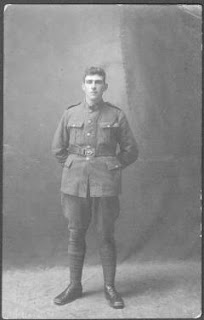 Driver James Wilcox was most likely only 19 when he enlisted.  He embarked with the Main Body on the 16 October 1914.  He served at Gallipoli and survived only to be killed in action on the Somme aged 22 on 7 October 1916 almost two years to the date he left New Zealand for his 'great adventure'.

If anyone has further information about the above two men or any of the men on the Arrowtown memorial I would love to hear from you.
Posted by Helen Vail at 2:35 PM