Sister Catherine Anne Fox was one of several nurses known in the Waimate area, Canterbury who drowned when the troopship 'Marquette' was sunk by a German torpedo in the Aegean Sea on the 23 October 1915.  When news of the sinking reached Waimate the town flew its flags at half mast.  Sister Fox trained as a nurse at Dunedin Hospital for four years, afterwards she continued her nursing at Waimate.  At the time of enlistment on 6 July 1915 she was working in Auckland as a private nurse.


Sister of Miss M. Fox, of Hallenstein's Buildings, Auckland. Born in Central Otago. Staff Nurse Fox was Mary Gorman's close friend had enlisted on 6 July 1915. The daughter of Mr & Mrs John Fox of Studholme. Catherine was born in Central Otago, trained at Dunedin Hospital for four years, and afterwards nursed at Waimate, Christchurch and Auckland.  She was nursing privately at the time of her enlistment so at the outbreak of hostilities she volunteered for services. So anxious was she to serve and fearing she might not be accepted at once she made arrangements to pay her own passage to England to volunteer for service in France. However, she was accepted by the New Zealand Government and sailed in the hospital ship Maheno. For some time she was attached to the Hospital in Port Said. http://www.rootsweb.ancestry.com/~nzlscant/marquette.htm#FOX

Sister Fox as mentioned was born in Central Otago the report of her father John Fox's death gives some background into the family's association with the region - hence why Sister Fox is remembered on the Wanaka memorial. 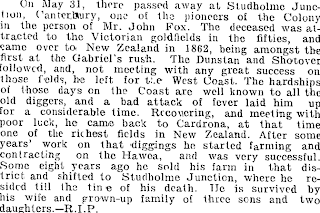 New Zealand Tablet, Volume 14, Issue 24, 14 June 1906, Page 20
Sister Fox is the second nurse I have found on a memorial, Sister Margaret Rogers was on the Akaroa memorial her story is also on this blog together with some background to the sinking of the Marquette.
http://100nzmemorials.blogspot.com/2011/03/staff-nurse-margaret-rogers-akaroa.html

Below is a link to a stirring report on the sinking, definitely worth a read: